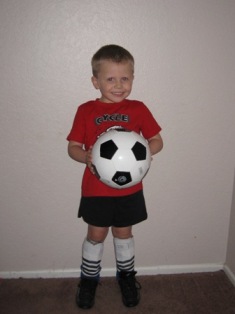 I recently had the opportunity to “lead” a group of 3 and 4 year olds in soccer practice after the primary coach’s child got sick. I use quotation marks around lead as my primary function was to ensure none of the children managed to kill themselves for the 20 minutes we had practice.

I learned one thing about organizing a group of 3 and 4 year olds…it doesn’t happen. Any activities have to be short and hectic in order to keep their attention, otherwise wandering commences. And wandering in the park we were at could be life threatening. Not only were we practicing at 6pm, which means in the dark (and on a field covered in gopher holes, at least I hope they were gophers), there was a group of people training their dogs mere yards away. All this was occurring in a “not so pleasant” area of town rife with “hoodlams” and “riff-raff.”

I started practice with a little stretching. This is my personal favorite part of practice because it didn’t involve running. We reached up in the air as high as we could, then we bent over and touched our toes. At least the kids did, I am about as limber as a walking stick. I guess one could say I am more timber than limber. You see, because timber is wood and…never mind.

After our muscles were sufficiently charged with oxygen (or approximately 36 seconds later) we warmed up with a little jogging. I ran in zig-zags and the children chased me. Remarkably, there were no collisions between children, just one near-miss. All this was occurring as the other parents simply watched from the side. There’s nothing quite so nerve-wracking or de-masculating as gleefully shouting “follow-me” and “look what I can do” and “I’ll be the Red Power Ranger” to a bunch of 3 and 4 year olds while a group of adults spectate from the side.

Now that the team was warmed up, we began the hard-core soccer skills enhancement portion of practice. I had the kids line-up and kick the ball in the general direction of the goal. I must say, I have done some difficult things in my life (driving a car with no AC for a Tucson summer, putting up a wood fence, and watching an entire episode of “Rock of Love” with Bret Michaels immediately come to mind) but nothing compares with keeping a group of 3 and 4 year olds in line and in order. I’d like to use the analogy of attempting to herd cats, but that would imply this was easy. It’s more like herding a group of cats with paper bags tied to their tails during a thunderstorm.

After a few minutes of continuously saying “nice shot, now go to the back of the line…no, the back…behind Giovanni….Giovanni is the one in the yellow shirt…I don’t know where your mommy is” I decided I would just remember the order and have the kids come up when it was their turn. This worked surprisingly well.

Children at this age fall into three basic soccer skill ranges: Good, average, and “at least they’re trying.” Some children can run up and immediately kick the ball through the goalposts from 15 feet away. Others gently nudge the ball with their toes until the ball inches across the line. I will not tell you which category my son falls into except to say I am currently looking for openings in toe-nudging leagues. At least he’s trying.

Once the chaos got unbearable, I decdided the last activity would be a scrimmage. The beautiful thing about a 3-4 year old team is you can put them all on the same team and have them all aim for the same goal and still have it take 5 minutes. So that’s what I did. I did my best to keep the kids away from the gopher holes, untrained canines, and random homies while they kicked the ball with no real purpose. Once the clock struck 6:20, it was snack time!

While the experience was completely draining and somewhat stressful, I wouldn’t hesitate to do it again. It was a great learning opportunity. I learned patience, authority, kindness, and most of all that the Yellow PowerRanger is way better than the Blue one.

No Replies to "Pee Wee Soccer"