The family and I recently had the opportunity to go on vacation. We decided to go to San Diego and check out a few of the local attractions. A ‘brief’ synopsis of our trip follows…

On Monday morning, Karina and I surprised the kids by telling them we were going to go on vacation that day. Their excitement and enthusiasm was immediately rewarded with a 7 hour ride in the van. Karina had to stay in Tucson a bit longer than me and the kids so she could attend the funeral of her good friend’s husband (side note: Dan Forchione tragically passed away on September 29. He faithfully served his community as a member of the University of Arizona Police Department and left behind a loving wife and beautiful 9 month old daughter. R.I.P. Dan.). As a result, I drove Ashton and Lynsey to San Diego and Karina flew in later with Alyson.

The drive to San Diego was very, very, very uneventful. I was alone up front while Ashton and Lynsey watched DVDs in the back of the van. It was the traveling equivalent of watching paint dry. But at least the scenery was terrible. I had brought only one CD to listen to and the only radio stations I could pick up most of the way were from south of the border (not that I don’t like the accordion, I just couldn’t understand the lyrics). As a result, I ended up conversing with our talking GPS most of the way. We have affectionately named her ‘Betsy’. A brief transcript of the trip:

That conversation may seem desperate, but please don’t feel bad. Betsy gave me more attention in that conversation than I got from females all four years of high school combined.

We finally arrived in San Diego and, after checking into our hotel, Ashton, Lynsey, and I headed to the airport to pick up the girls. While we waited for Karina’s plane to arrive, I bought the kids their first souvenirs at the airport. They each got their own snow globe (or in this case, glitter/plastic chunks globe). Lynsey managed to drop hers in the concourse within approximately three minutes. I cleaned up the plastic as much as I could and took her to the bathroom to wash the liquid from her feet. I wondered what the people walking by thought as the glittery mess made it appear as if Rainbow Brite had just blown chunks (pardon my slang, for those of you unfamiliar with this term, to ‘blow chunks’ means to chunder).

Once our family was reunited, we headed to our hotel for a relaxing night of sleep before our first big day. We stayed at the Doubletree Club Hotel in the Hotel Circle are of San Diego (this area is aptly named as there is a high concentration of hotels and it is roughly shaped like a crooked rectangle). We had high expectations for the hotel considering the price we were paying during what I would think is an off-season for tourism. Unfortunately, we were fairly disappointed for a few reasons. First of all the room was very crooked. My ears practically dropped from teh change in altitude from one side to the other. I felt like I was in a villain’s lair in the old 60’s Batman TV series (you know, the one that excessively used onomatopoeia during fight sequences: “BOOM”, “POW”, “BARRACK”). The walls were super thin as well. This did not bother us so much as we had quiet neighbors. However, I am sure they were far less than pleased to have 3 kids under 7 years old rooming next door to them. There was also a VERY used bandage in the covers provided for one of the kids’ bunks. See Exhibit A for proof. 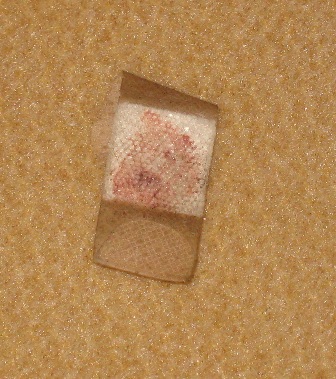 (Side note: How does whoever has a gaping flesh wound such as the one previously covered by that grotesque bandage not realize their band-aid is missing?! And how does the bandage not get caught in the WASHING MACHINE I COUNT ON DOUBLETREE TO USE BEFORE I SLEEP IN THEIR BED?!?!)

But all this shouldn’t matter as long as there is a good bed to sleep in. Unfortunately, the bed was strike 4. It was as, Karina likes to refer to it, a “taco bed”. In other words, the bed is shaped very much like a taco and so, after 8 hours of sleep, any object is inevitably drawn towards the center of the bed, not unlike a black hole.

To top off the whole hotel situation, the hotel charged $14 per day for parking!! For the love!! For $14 a day, I could have gotten half of a Motel 6 room including the bed, semi-functional cooling unit, and assorted fungi and bacteria! Plus the parks charged $12 for parking requiring us to fork over  a whopping total of $26 per day, just to park my car!! I need to invent some sort of car-stacking mechanism whereby three cars can park on top of each other. That way when you travel with friends to amusement parks and hotels, you’d only pay 1/3 the normal charge for parking (See illustration for design details): 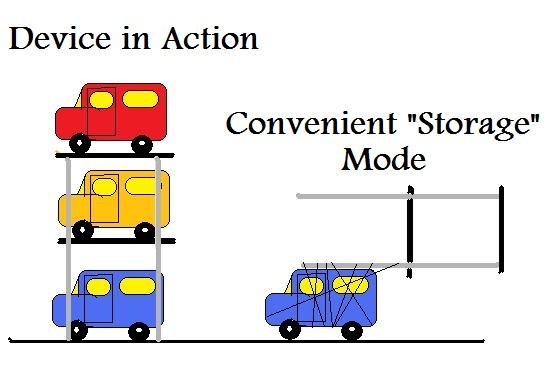 David that is ingenious, I need to remember to keep that to myself.

Days 2 and 3
On the second day of the vacation we all agreed to visit Legoland. We excitedly packed into the van for the half hour drive to Carlsbad. Eagerly we headed towards the park only to find a sign that said “Legoland: Closed”. Yep, we pulled a total Griswold. Apparently Legoland is not open on Tuesdays and Wednesdays, at least in October. I felt so bad as we drove the half hour back to San Diego. But, this gave us the opportunity to hit Seaworld which we all loved.

At Seaworld we spent the day gazing at giant, blubbery creatures who spend all day eating. And, in addition to the tourists, there were sea creatures! It was fascinating to learn how all of the glorious animals on display live in the wild. For example, Orca’s travel in pods and sometimes play with their food, dolphins enjoy playing within their pod, and apparently sea lions enjoy wearing silly hats while dancing with humans. At least that’s what I took away.

In addition to the animals there was a cute Sesame-Street themed kids area (The Count: “How many sea creatures have been captured and put on display to illustrate vy sea creatures should be left alone? One sea creature…two sea creatures…Ah, Ah, Ah [this episode demonstrated in the picture below]) and cool ride called “Journey to Atlantis” that was a blast. Overall, we gave the park a Varner family 9 thumbs up. 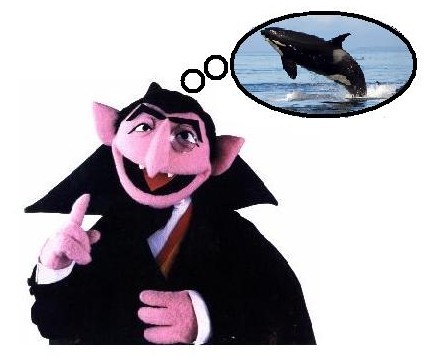 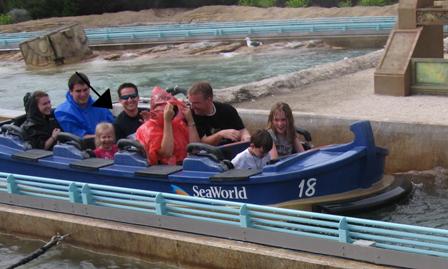 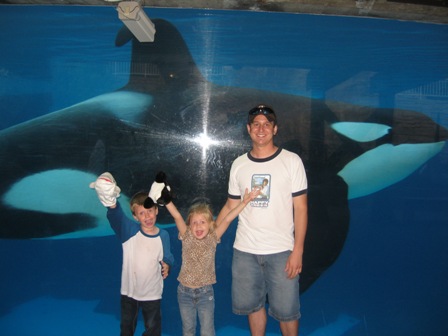 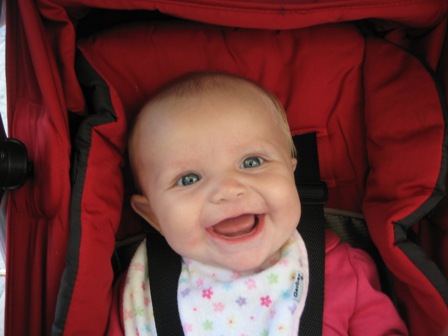 Days 4 and 5
On Thursday we headed back to Carlsbad to check out Legoland. The park was surprisingly large and definitely geared towards younger children. The rides were generally no bigger than those you’d find at the fair. On the plus side, the rides were not set up on a tractor trailer the night before. While the park was only open until 5pm, we were able to hit all of the rides over the course of two days. Our final family rating was 5 thumbs up.

Here are some pictures of us at Legoland. As an added bonus, I have included a picture showing our favorite Lego exhibit. It was a (unintentional?) portrayal of a violent vehicular/pedestrian accident. 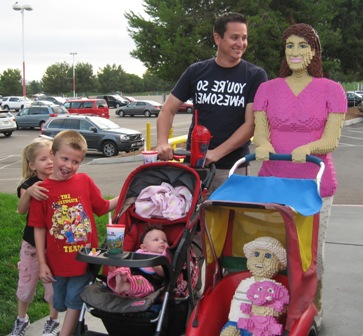 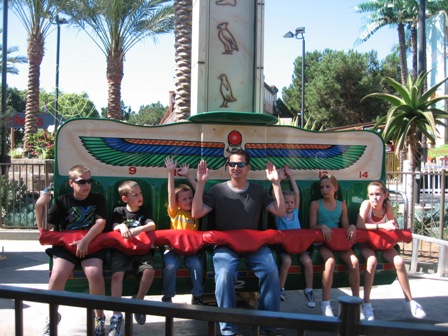 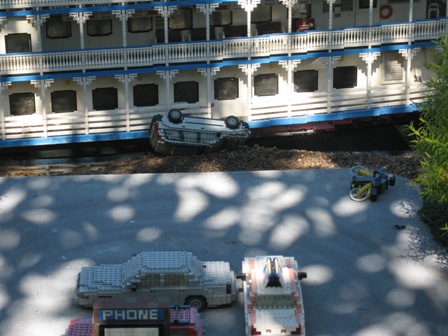 Day 6
On the last day we spent some time exploring the San Diego area. We first went to Seaport Village, a quaint shopping district with numerous, unique shops. From there we hit the USS Midway museum. This was my personal favorite part of the trip as I love all things aircraft carrier. Being on an actual aircraft was very exciting for me. (I am the red blob in the picture below) 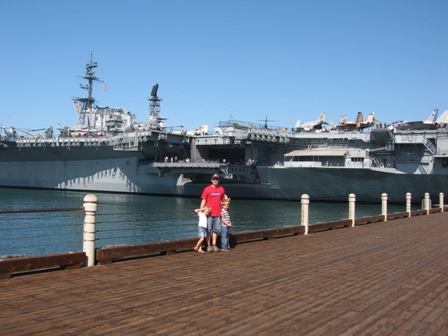 Finally we went to Coronado, which I hear is very beautiful. I will have to take those people whom I heard it from’s words as it was incredibly foggy (See picture). 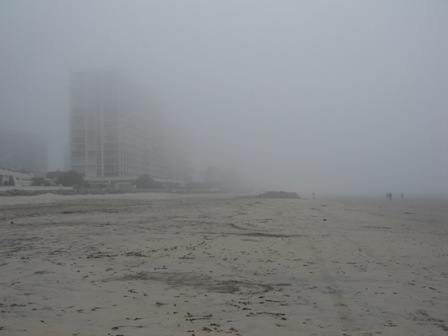 We went to the beach and I’m pretty sure I actually saw some of the ocean. The kids were enormously excited to go to the beach. Ashton wanted to look for seashells and Lynsey wanted me to help her build a sand castle. You’ll be happy to know both of their dreams were crushed. Ashton was able to find only two broken pieces of seashell. I figured by his reaction that it was time for an uplifting life lesson from dad. So I told him that God makes beautiful seashells, much like each of us. Then the seagulls of life’s bitter disappointments come to feed on the meaty innards of happiness. By the time they are done, all that remains is a broken, empty shell of the beautiful creature that once existed. I think he got the point.

Lynsey’s disappointment had to do more with unrealistically high expectations. The only castles she knows are those in the Barbie and Disney movies. They are always enormous, shiny structures with numerous turrets and flags waving about. What I ended up creating resembled more of a Water Buffalo turd. I explained that her daddy wasn’t an architect or a sculptor and that someday, when she needs to determine the net present value of a given cash flow, she will learn to appreciate my unique talents.

Here is a picture of me working on my masterpiece (cut me some slack. Some castles must have looked like cakes)… 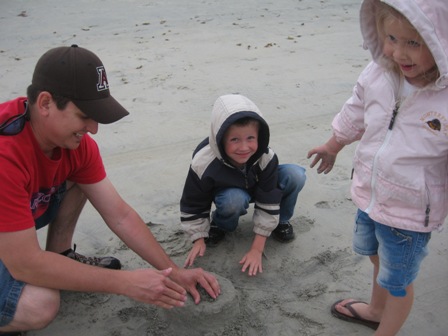 Day 7
On Sunday we packed up and headed back to Tucson. Thankfully I had Karina up front to talk to as she played her Nintendo DS. Now that we are back at home, it’s time to start planning the next vacation. I’ll start researching which hotels offer “tostada mattresses”.

No Replies to "San Diego Fun!"