Body piercings. Sword swallowing. Black Friday participation. These bizarre oddities of human behavior have always perplexed me. Why would a rationale human participate in endeavors such as these? Well, in order to satiate my hunger for this knowledge in a scientific fashion, I decided to participate in an equally odd ritual: I showed up for a midnight viewing of a movie matinee. Now, some of you may say “David, you are fooling nobody, you clearly went because your wife asked you to go with her to the opening of Twilight: Breaking Dawn.” And to you I say, you may indeed be correct, but I feel more comfortable in my masculinity thinking I went as part of a scientific experiment.

Months ago Karina asked me if I would attend the midnight showing of the next installment of the Twilight movie series. As it seemed so far away (thus giving me plenty of opportunities to find ways of bowing out) I agreed. As the saying goes “out of sight out of mind”. Sure enough, I forgot about it until it was too late. The one saving grace is we did not get tickets for the marathon showing of the entire series leading up to the premiere of Breaking Dawn. I may be a good husband, but I would not rule out taking up Munchausen syndrome to avoid 8 hours of vampires versus werewolves.

Alas, the night of the premiere came upon us. And just so those of you who were unfortunate enough to miss experience can feel included, I have provided a time-phased rundown of the night:

8:30 – Karina and I arrive in the theater parking lot. First stop: caffeine top-off. Our normal bedtime is in the 10 o’clock neighborhood and, assuming no hiccups in the plan, we weren’t getting home until 2:30 in the morning. One Grande Triple Skinny Peppermint Mocha Soy Latte later, we were ready to go. Incidental note: If you would like the experience tasting heaven, try the drink above. Amazing. And low in calories and saturated fat! You are not truly a man until you order a drink like that for yourself.

8:40 – We arrived at the box office and received our tickets. We were told to head around the building to the back of the line. Unfortunately, the theater did not have the courtesy to warn us that we should have brought reserve water and a Sherpa for the trek we were about to undertake. Rather than having us head left on a shorter path to the back of the line. We were told to go right. That way we would have the opportunity of feeling the humiliation and frustration of knowing exactly how far from the front we really were.

Side note: I did not see many folks dressed up in Twilight-related fan gear. This made me feel better. I was “this” close to dressing up like Edward Cullen. I felt it was a perfect fit for me as I have a gleaming white, hairless, sunken chest just like Robert Pattinson (the actor playing Edward Cullen). I was sorely disappointed once I saw the movie however (see below). My backup plan was to wear a “Team Bella” shirt, but due to a lack of time for preparation this shirt did not get past the concept stage of development.

8:47 – We finally got to the back of the line. We scored spot #2,137! It is times like these I wonder what in the world I am doing and isn’t this one of the reasons I bought a DVD player? (also to watch the complete Police Squad series on DVD of course).

9:22 – Bored, I take an informal survey of the line and come across the following demographics: 96% females; 3% male slaves of love; 1% people with obscene incomes (Occupy shout out – Holla!).

9:37 – The line is moving! I am as excited as an emaciated teenage vampire getting his first whiff of emo human blood in biology class!

9:45 – We are joined in line by our friends Dan and Erica Farmer. Dan, much like me, is a good husband willing to sacrifice time, sleep, and pride to accompany his wife to a Twilight premiere. We are ecstatic to see each other: 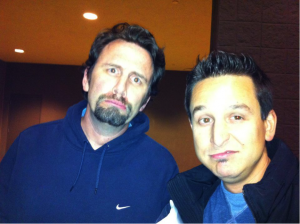 10:30 – A friend of mine who is following my updates on Facebook decides to text me taunting my masculinity (accusing me of missing vital parts of the male anatomy) and bragging about how his night includes watching football and the assumption of other “manly conquests”. He shall remain nameless for the sake of his wife. He forgot to mention that he was going to accompany his wife to the Twilight premiere a day later. Additionally, is it possible for one’s social life to sink any further than to breathlessly await Facebook updates from a friend who is standing in line to watch a midnight viewing of a Twilight movie? I submit it is not.

11:00 – We are finally admitted to our theater. After settling in to our seats, Dan and I make the traditional husband run to the concession stand. Normally Karina and I buy a medium popcorn (or a large if we are feeling adventurous). Knowing that I had another three hours until food ahead of me, I opted for the Extra Large popcorn. I am so used to being upsold to the next popcorn size I nearly said “no” instinctively after ordering my popcorn. However, the cashier did not attempt to upsell me as I had bought the, up until now assumed mythical, “size for which there is no upsize option.”

Status of my mood: Excited to sit down 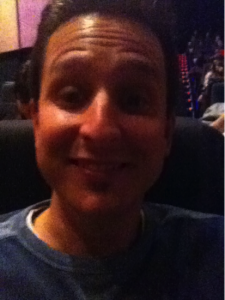 11:20 – I stare absentmindedly at the blank movie screen. There are no previews or advertisements running at all as we all wait until midnight. Come on Harkins!! You have a captive group of bored moviegoers. Take advantage of us by attempting to sell us your wares!

Status of my mood: Bored but comfortable 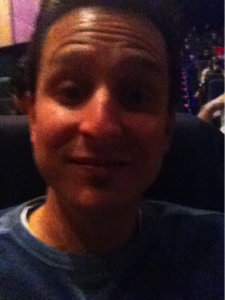 11:30 – A team of theater employees come in with several giftbags. We are told they are prizes for being the first to correctly answer a trivia question. I was feeling pretty confident of my chances if the category was science, sports, or current events. But no, the question was “what three vampires make up the Volturi?” My guess of Lestat Lioncourt, Dracula, and Count Chocula was unfortunately incorrect. Would you believe someone actually knew the answer to that question off the top of their head?! For their correct answer they were awarded two loyalty cups, a loyalty t-shirt, and 2 tickets to a future movie. Based on the fact that the person knew the answer to that question, I am 90% confident those 2 passes will be used for another showing of Breaking Dawn tomorrow.

Status of my mood: Groggier 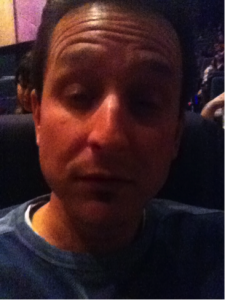 11:40 – The people behind us are informed that a person in a wheelchair may need their seats. They had chosen to sit in the handicapped aisle. They were not too happy. I may or may not have heard a comment to the effect of “if he’s in a wheelchair, he doesn’t need a seat.” What is it about attractive teenage vampires that brings out the worst in people?!

11:51 – Time for my pre-movie bladder evacuation. Heading towards the restrooms I see a line stretching 10 ladies deep coming out of the women’s restroom. Thankfully the men’s restroom is as wide open and empty as a Midwestern prairie. Or course, it smells more “urine cakey” than I envision a prairie smelling.

11:57 – You seriously cannot make this stuff up. Karina looks at me with weary eyes and says “I’m so tired”. I console her with my gentle response: “I DO NOT WANT TO HEAR THAT! WHOSE IDEA WAS THIS ANYWAY?!”

Actually I did not say this. The fact that I was at a midnight showing with Karina should indicate that I clearly have an inability to stand up to my wife. (Just kidding)

Status of my mood: Nappy 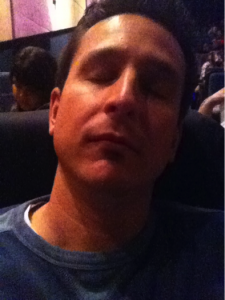 Midnight – Showtime finally!! I do not want to spoil the movie for anyone, but here are a few random observations I made during the course of the movie:

One of the previews was for a dark live-action Snow White remake called “Snow White and The Huntsman.” I think I will choose to pass on that one as the 1930’s cartoon version was a bit too gritty for me.

I had heard that ladies would cheer upon seeing Jacob or Edward fort he first time. I was not disappointed. Not only did they cheer for Jacob, but he was shirtless within the first 60 seconds of the movie! I prepared myself for 2 hours of feeling inadequate but was pleasantly surprised that Jacob remained clothed for the majority of the movie.

During the honeymoon scene I saw more of Robert Pattinson’s upper torso than I could have ever wanted (even if I was told watching inordinate amounts of his upper torso would bring a financial windfall). I was surprised to see wisps of chest hair!! Rather than feeling disappointed or inadequate, this actually gave me hope. After over 120 years as an immortal vampire, he was able to eek out some chest hair. This means there is still hope for me!

Overall I thought the movie was well made and interesting. The two hours actually passed much quicker than I thought they would. While I may gripe and moan about my sacrifice to watch it with Karina, I do not regret it. It was a fun experience and I am hoping I racked up some credits for when the third Batman movie opens.

No Replies to "Midnight Movie!!"