I’ve taken a break from blogging recently mainly because I haven’t found anything of note that I’ve been passionate about. That is until tonight. You see, I found a certain movie entitled Bigfoot. 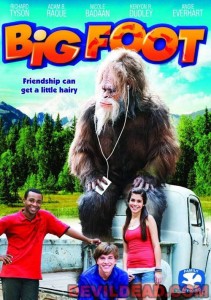 We decided to have a family night tonight and watch a film we all could enjoy. Being financially sensible, we limited our choices to the free movies available to us on Amazon due to our Prime membership. You may ask yourself what kind of movies are available to watch for free when one has an Amazon membership? Well, it turns out major blockbuster movies…from decades past. As many of you know, I have an aversion to films made prior to the 90’s so we decided to watch a more recent movie (2009) that was inexplicably offered for free (it turns out the fact that it was free was more plicable than I had known). When I say that “we” had decided on Bigfoot, I will note that it received a majority vote of 3 out of 5 family votes. Karina had voted “no” (which I now must give her credit for) and Alyson repeatedly voted for “Bob the Builder”

My general feeling on this movie is that I am very unimpressed. Of course, it may not be fair to this film as the bar for sasquatchian representation in the fine arts was set high by Harry and the Hendersons. Let me tell you, this was no Harry and the Hendersons. First of all the acting was terrible. The lead male (not Bigfoot) couldn’t even convince me he preferred the company of females…if you know what I mean, much less that he was interested in the head cheerleader at his school. And the lead female acting was not much better. And by that I mean “possibly the worst in cinematic history”. But thankfully I was distracted from the terrible acting by the continuous lack of continuity (is that irony? I can’t tell).

Despite these drawbacks (and did I haven’t even mentioned the gratuitous Bigfootal nudity despite the movie’s PG rating) I forced myself to sit through the movie. And finally my viewership was rewarded with a climactic vehicle chase scene that must have cost tens of dollars. The “epic” crash didn’t even result in an explosion! At least there was a sizeable dust cloud.

The movie finally ended and amazingly everything worked out for the protagonists. Not to ruin the ending for those of you who are itching to rent this as I type, but a more apt title for this movie would have been “Bigfeet”.

I casually noted prior to watching the film that the rating on IMDB was 5.5. This is normally not a good sign. After watching the movie I am trying to figure out how it landed that high of a rating. My assumption is everyone of the actor’s parents voted it a “10” twice and it has a substantial following in the “Sasquatch Is Real” community.

Despite all of the drawbacks of this movie, I still maintain it is better than any movie that came out in the 80’s (with two notable exceptions: Batman and The Naked Gun). Speaking of the 80’s, this movie made amazing use of puppeteering technology pioneered with the Teenage Mutant Ninja Turtles and perfected on Sesame Street. I really came to believe that the Bigfoot I was watching was truly a man in a hairy suit with a giant electronic device on his shoulders that was was robotically moving in an attempt to resemble a face.

No Replies to ""Bigfoot" Movie Review"