I absolutely love monsoon season. It’s my favorite time of year and the yearly storms actually almost make one forget that it is approximately 115 degrees outside. Unfortunately I had missed most of the good storms this year (partially my fault as we did travel to San Diego for a week during prime monsoon season). Our experience yesterday more than made up for it however.

After dropping off the older kids at summer camp, Karina, Alyson and I decided to hit the Tucson Mall. I will not fill you in entirely on my motivation for wanting to hit the mall (hint: it involved “tailoring” and “fancy jeans”) but we decided to make a few hours out of it and browse around. We hit a few of our main staples. For example, Karina always has to check out the makeup at Sephora. For some reason, yesterday she had it in her mind that she wanted some neon nail polish. Even more than that, she was willing to pay for such a thing! Well, it figures that Sephora did have a shade of yellow that met her criteria (how neon was this you ask? So much so that I finally understood why the Sunglass Hut was located next door…and also three shops down…and also on the lower floor near Macy’s). I could not believe the price on the nail polish. I informed Karina that we could probably find a gallon of a similar shade for merely $24.99 at a local home improvement store but she was unfazed.

She wasn’t the only one to spend some money though. I did go into the hat shop cleverly called Lids to look for an Arizona Diamondbacks hat. In a devious bait-and-switchesque scheme Lids had priced many hats (including all of the University of Arizona hats) as buy one get one half off. How do you turn that offer down? I submit you do not! So I walked out with two classy new U of A hats. When I was going through the package and removing the stickers from the hats I noticed that one hat had a contest going. After purchasing the hat, you are requested to post a picture of you wearing it on the company’s Facebook page. Whoever’s picture gets the most likes wins “Free hats”! If there is anything I love more than a good contest it’s free hats. So I am going to be posting my picture on their page soon. I do not take this contest lightly though and I have done everything I could to ensure my picture appeals to the most people. Here is the picture I plan to submit: 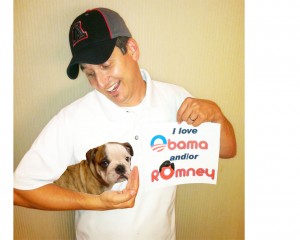 Yes, that is me holding a cute puppy. And I am also holding a sign that reflects my support of the candidate you also support in the upcoming election. You will note that I had to improvise on the logo for Mitt Romney. I wasn’t sure what his logo was so I made my own homage to his amazing coif of hair. If you get a chance, please like the picture I will post soon. If I win, I will show my gratitude by letting you look at the sweet hats I win.

After Lids we headed to the Animal Kingdom to look at the cute, overpriced puppies. The puppies currently in stock were indeed cute and very much overpriced. Some of the more affordable puppies there had prices written out as “$99 per month.” Out of curiosity I asked a friendly employee how long the term was because I would be willing to adopt a pet for $99 per month if the term was 2 months. But no, the term is 36 months! I will not pay $99 per month for 3 years on ANYTHING that does not have 4 wheel drive and power windows! What about a cash discount you ask? Well, there actually is a discount for paying in cash. You get to walk out of the store with a dog for only $2,150 if you pay cash. A dog that will never EVER live up to a $2,000 price tag (I’d better be able to teach that dog to fetch items from the refrigerator and pick up his own waste).

We headed to the lower level of the mall with the intention of hitting Old Navy and then the Disney store as a reward for Alyson behaving. While we perused the clothing options in Old Navy we heard a succession of loud crashes. My first thought is that I must have just heard Old Navy’s already ridiculously low prices falling through the floor. I was mistaken however. It was actually window panes from the roof of the mall falling to the floor due to the wind and rain of a monsoon storm I was heretofore unaware of its existence. Within about a minute the power in the mall went out. As it was about a half hour until mall closing and cash registers were rendered inoperable due to the lack of electricity the stores began herding people out and locking their doors. Herding people into the heart of the mall. You know, where ceiling panels were raining down. 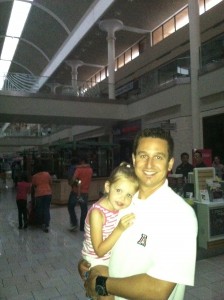 With all of the stores closing and the mall structure collapsing Karina and I decided it might be time to head home. We had wisely parked in the covered parking just outside Macy’s. Unfortunately, Macy’s had closed it’s doors and now our parking spot was now a healthy jaunt away from any other exit. Normally this would be just a minor inconvenience but the sky was currently falling and lightning was everywhere. Worse yet, I had to go to the bathroom.

Knowing I had the flashlight in my iPhone I headed to the nearest restroom. The lights were out of course so I cautiously made my way into the pitch black men’s room. This was an exceptionally eerie experience and I could almost hear the cries of the nosehairs murdered by the smelly atrocities that had occurred in that room over the years. I found a urinal and commenced doing my business. Thankfully the urinal was a no flow so I did not end up needing to rig up an electrical current using my phone and a paperclip to initiate a flush.

Once reuniting, Karina and I decided to walk around a bit to hopefully wait out the storm. This was less of a relaxing experience than it normally would have been due to the fear that the roof could crash down on us at any moment. We made our way to the food court which for some reason still had power. Despite the chaos around them, the food court vendors continued to heroically feed the hungry refugees in exchange for money.

At this point Karina and I decided it was time to go. As a man, it is my duty to retrieve the van during bouts of inclement weather. So, I knew it was up to me to brave the lightning, mussed hair, and slightly damp pant cuffs on my trek to the van. I cautiously stepped out noting the idiots walking around under umbrellas as the lightning crashed all around them. Once I gathered my courage, I set out in a dead sprint shrieking like a banshee…err…audibly warning the others around me of the dangers of the death flashes all around us. I believe this is what I said, and I quote: “AAAAHHHHH!!!! Lightning!!! Mommy, I don’t want to die!!!!” Thankfully the rain disguised my tears…of…masculinity. 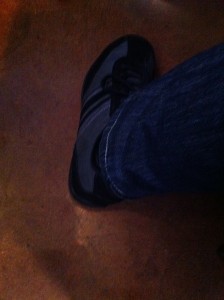 Trust me, those pants are really damp…but it’s the least I can do considering Karina birthed my three children

I was able to successfully get to the van and pick up Karina and Alyson. As we exited the mall we passed fire trucks heading to JC Penney which had managed to catch on fire. 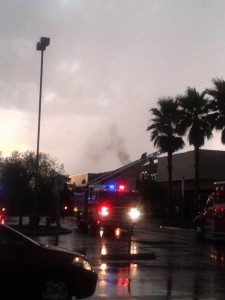 Thankfully the rest of the trip home was mostly uneventful and we were able to relax and recover from our mall experience. After what I witnessed, I don’t think I’ll ever be able to go back there…until Wednesday.

No Replies to "Monsoon Terror"