Phat Wildcat Back Tat (aka The Price of Fame)

In the interest of full disclosure, I wanted to begin this blog by informing you that David is not actually writing this. Due to recent events he has found the need to hire an assistant to coordinate responses to his many, many fans and to ghost write this blog. I do have a name but David has indicated I am not allowed to refer to myself using it. His rational is that he also has a name and David doesn’t want me to think I am anywhere near equal to him in any way. SO I go by “Minion”, although “Stooge” and “Lackey” are also acceptable in certain situations. It’s not too bad doing Mr. Varner’s bidding but sometimes he makes me feel less than human. For example, I am not allowed to make eye contact with him or with his tattoo.

Speaking of tattoo, you may be aware that I had a pretty big week (I will now speak in David’s voice from now on…which is an incredible honor [he asked me to add that last part]). After getting my first tattoo last summer (an experience I blogged about here: http://dave.varnerific.com/2013/07/21/i-got-my-tattoo/) I did indeed get “the bug” that other tattoo wearers refer to. This refers to the desire for many more tattoos once the first has been applied (poked?).

Originally my plan was to put on a sweet University of Arizona tattoo that had Wilbur the Wildcat giving his evil rival Sparky the Sun Devil a nasty noogie. I had even drawn up my idea as to what it should look like. As you can see below, it is not only classy, but also captures my U of A team spirit as well as giving Sparky a few subtle jabs (ie. his spork). But please do not get the wrong idea because of the “Censored” bar. It was not pornographic in anyway. I had merely placed Sparky’s tail in a spot that a few of my less mature friends could not handle. My intent was to show his tail between his legs, much like a dog displays fear. My “friends” however thought it looked like Sparky was well endowed and possibly enjoying the noogie. Clearly I could not get this tattoo as my friends would give me (even more of) a hard time. 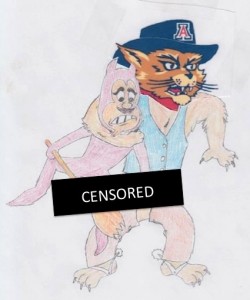 So I decided to leave the design work to the professionals and went to our church’s favorite tattoo artist: JamieLee Ulmer at Sacred Art Tattoo on 4th Avenue. I gave her a rough idea as to what I was looking for: namely the block A, Wilbur, and maybe him poking out or something. Ion my head I was thinking of something EPIC like this: 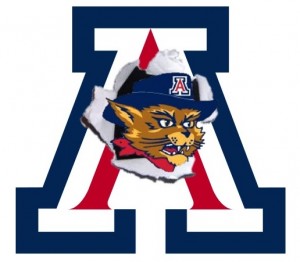 As you will see, her idea turned out pretty good as well.

The day before I was scheduled to go under the needle she texted me a few designs. The first few were cool but just not “me”. Then she sent along the design that would eventually end up on my back. My first reaction on seeing it: PUT THIS ON MY BODY! 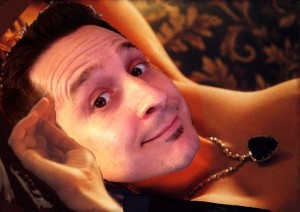 My goal for the big day was to get the whole thing done at once. So I showed up around 5 and JamieLee got the stencil ready and placed it on my back. We got started on the actual jabbing around 6. By around 10 she had completed the Wildcat and the tearing skin. 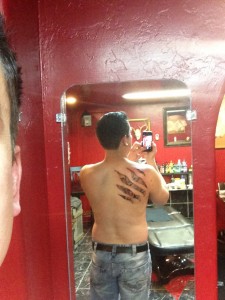 We took a break at that point for her to get the “A” stencil ready and for me to walk 4th Avenue at night. I think this was part of her plan to make me realize there are many scarier things I could be doing on 4th than getting a tattoo. I was looking for coffee and figured I could find something open until 10 as it was about 9:50. I did find a coffee shop and deli that had signs saying they were open until 10 but apparently they meant “10” as both had already locked up. I walked back to the tat shop and bought a Big Tex cinnamon roll to give me the energy I needed to lie on a chair for another 2-3 hours. Jamie asked how my tat was feeling and I told her “squishy”. When I turned around she said “oh my” which didn’t make me feel great. It turns out I was bleeding pretty dang good (slightly less than “profusely” but more than “slightly”) and some of the blood had soaked through my shirt. After convincing me that I had not actually been shot JamieLee began the second part of my tattoo.

The entire “piece” was completed around 12:30. In terms of actual active tattooing I was under the needle for 5.5 hours. She showed me the completed tat and, needless to say, I was excited. Not only was the design fantastic, but JamieLee had come up with that design to cover a huge scar I’ve had on my back since middle school. The scar resulted from a birthmark I had removed. So, my whole life I have always been embarrassed to have my shirt off. Whenever we went swimming I was always one of the guys wearing a t-shirt just to avoid questions. When I saw Jamie’s completed work I was excited and actually anxious to show people. I can’t even express in words the difference it has made just in terms of covering the scar. 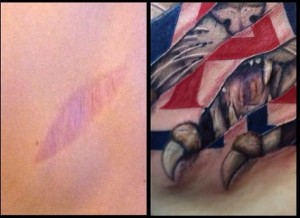 After my first tattoo a lot of people asked if it had hurt. My answer: “not as much as I had thought it would.” Well, this tattoo was different story. If given the chance, at about hour 4.5 I would have gladly traded the needle for a rousing session of waterboarding. It felt as if all of my nerves were attracted to the sound of the needle and tried to get in on the action. My skin was super sensitive and a nerve kept getting hit, which made my left foot jerk. It wasn’t embarrassing at all. I think I am good in terms of tattoos for a while. However, much like giving birth, I am sure I will soon forget all of the pain and blood and remember only the joy and pride that arose from the experience and I will be looking for a new one. 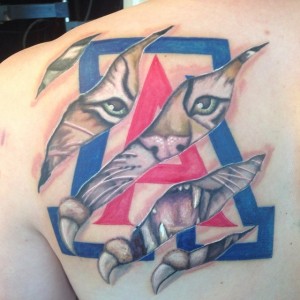 However, this tattoo will be hard to top. I was obviously satisfied with the result but Karina (being the awesome wife she is) thought it needed to be shared with the U of A community. She submitted it to several Facebook pages including our local newspaper the Daily Star’s. The Star decided to run the picture and it got over 4,500 likes and something like 1,600 shares. Before I knew it, my back was everywhere on Facebook. I went from being ashamed of my back to having it on the desktops of half of Tucson all in 24 hours. Several other Alumni organizations picked it up and it was also tweeted out by the U of A’s Athletic Director Greg Byrne. Needless to say, I was surprised by the reaction. The comments were overwhelmingly positive. The only two negative comments were from ASU fans. I could tell because of their jealousy and poor grammar.

In fact, the Daily Star ran a special today on their site highlighting the 10 most “liked” Facebook posts in honor of Facebook’s 10 year anniversary. I checked it out to see if my tat made it. Sure enough, it was Number 1! And not only that, number 2 (Linda Ronstadt being inducted into the Rock and Roll Hall of Fame) had less than half the number of likes my tat got.

I do want to state one thing: I keep referring to my tat. Make no mistake, my involvement was saying “me want U of A art”, providing my back as a (ridiculously muscled) canvas, and paying for the honor. JamieLee Ulmer came up with the design and translated that to an even better image on my back. She is amazingly talented and I would recommend booking time with her now before she can’t squeeze us little people in anymore. J She is awesome!

So, what’s my plan now? Well, despite the recent flurry of publicity, I am managing to stay grounded. I’ve seen many people who have reached my level of fame (or at least the level of fame my back has received) not be able to handle it. Cough…Bieber…cough. I am doing ok though. Just hanging out with my family because they are my priority. 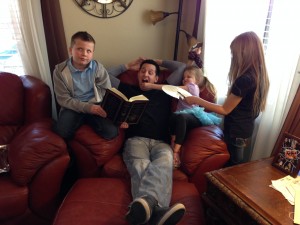 The tat is healing well too. I have added a small item to ensure the focus is placed on the center of the piece. 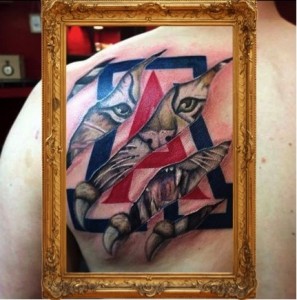 I may get another tattoo down the road, but I am not sure. My next tattoo has a high bar to live up to. It would be hard to top the reception my phat Wildcat back tat has received. I’m thinking whatever it is needs to incorporate something that has the same kind of mass pride appeal and incorporate a symbolic character forcing it’s way out. On second though, I think I have it…. 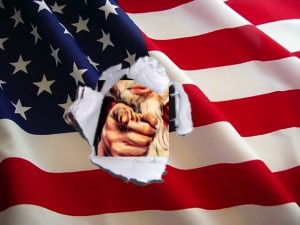