***DISCLAIMER: No animals were hurt in the making of this blog (unfortunately)***

You never know what life is going to throw at you next, which is why I am a big advocate of being prepared. And I am not alone. The great songstress Taylor Swift once said “I try to prepare for everything beyond the extent of preparation.” That sentiment is so deep that I do not even get it. And of course, no discussion about preparation is complete without this sage quote: “Better relief from hemorrhoid symptoms begins here” – Preparation H.

Beings I am responsible for the livelihood of my family, I want to make sure that I am prepared to care and provide for them in the event something unexpected and catastrophic occurs. For example, a natural disaster, a terrorist EMP attack, or far more likely: the zombie apocalypse. I don’t want to be the guy who becomes everybody else’s food when the canned food at Wal-Mart is gone. So, I recently began toying with the idea of learning to hunt.

I find the idea of “hunting” very appealing. I love the thought of identifying my prey, devising a plan to capture it, and then systematically hunting it down. That is why I usually come away very successful on Black Friday. But applying that strategy to animals? Well, I was a bit nervous. Namely because the chance of a Big Screen TV (with 3D capability no less!) turning on me and mauling me to within an inch of my life is remote. However, a mountain lion tends to be a little more feisty when it comes to putting it in my proverbial cart.

Before I go further, I would like to address my friends who have a problem with hunting. For example, Karina is uneasy with the concept of hunting and killing an animal, even for food. I’m thinking she believes hamburger is grown on meat trees because, unless there is a new technique I am unaware of, there is no way to get a cow steak without “injuring” it…heavily. And when I go out looking for mountain lion, they are free-range mountain lion which is not something I can say about my rump roast’s previous incarnation.

So, back to my adventure. Currently there are several animals in season including bobcat, mountain lion, and skunk. The beast we went out to hunt was the mighty coyote. 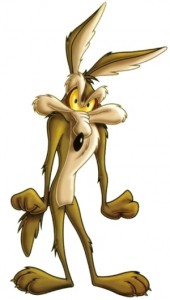 Our prey in it’s mature form.

A lot of people don’t know how to pronounce coyote. There are actually a few acceptable variations such as “coyote”, “coyote”, and “coyote.” One thing people are aware of is that coyotes are very similar to dogs. That being the case, I figured this hunting expedition would be pretty easy. All we would need to do was turn on a can opener and listen for their jingling collars as they approach. Then…BAM: new best friend!

It turns out that hunting coyotes is a lot more difficult. Thankfully I had my Uncle to go with. He provided some very valuable information. Such as the fact that coyotes are very sensitive to odors, sounds, and movement. So our first steps were to identify a location, and then hike there silently and downwind (or upwind, I am not sure which is the correct way of saying “so they don’t smell us”). To aid in the masking of our natural odors, Uncle Ray had brought a masking scent. I chose to use Jordache’s budget version of Calvin Klein’s Obsession.

Along the way, we paid special attention to the information nature was providing. For example, these tracks told us coyote were definitely in the vicinity: 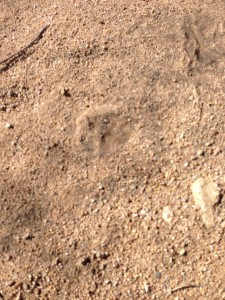 We also deduced from some droppings we encountered that there was a deer in need of additional fiber in it’s diet. And probably the most sobering thing we encountered were these tracks that I ended up following the whole way: 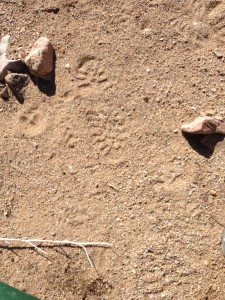 I’m not sure what kind of hideous beasts made this track, but I bet it’s a mean one!

Eventually we meandered to our chosen spot. My Uncle picked out his spot and told me to head around the corner and “sit in front of a tree to blend in.” Well, I didn’t realize I was being instructed by an AMATEUR! If sitting in front of a tree helps me blend in, I genious-ly figured my blend ability would double if I also sat BEHIND a tree as well. By the time I figured out that having a tree in front of me has a bizarre tendency to reduce my field of view, it was too late. Nope, that firm rock I was perched upon would be the resting place for my firm buttocks for the next hour and a half.

It is important to wear camouflage to blend in with nature. In this video, I show how well I blend in. Look closely or you will miss me.

Now that we were set up, my Uncle began using his distressed animal call. I am not sure what kind of distress this animal was supposed to be encountering, but it sounded severe: perhaps an eviction notice, or more likely an injury I guess. The sound was piercing; a mix between a terrified rabbit, javelina, and modern Stevie Nicks. I’ve got to give credit to my Uncle as he really sold it. Even though I knew what was going on, I was still tempted to walk around the corner and ask “are you ok little buddy?” to the poor creature in obvious need of help. However, after several hours of the sound I was ready to put it out of it’s misery.

The call is intended to bring in scavengers looking for an easy meal. So after a minute or two of sounding the call, we would sit and observe the desert in front of us looking for any signs of our prey. I truly felt at one with nature at this point. All 5 of my senses were heightened: my ears tuned to the sound of footstep or a cracked twig, my eyes slowly scanning for any movement, my nose sniffing for peculiar odors, and my senses of style and humor peaked in order to draw in any female critters.

We continued to sit, the dead silence punctuated only by my Uncle’s fervent cries for help (in character as a jackrabbit of course). After what seemed like forever, I finally moved enough to check the time and see we had been sitting for about 4 and a half minutes. Thanks a lot TV and iPhone. Now I can’t sit still for even 5 minutes anymore. Consequently, I had a lot of time with myself. Which is good as I am one of my two favorite people.

I began to dwell on the beasts we were hunting. The coyote has amazing senses of smell and hearing. But it sees in black and white and the smell sense is useless if the wind is going the wrong way. What would happen if there were an animal that had the best of all 5 senses? Why this apex predator would be invincible! It would probably be so sensitive to living entities around it that we would never even see it, save for perhaps fleeting moments on film. Yes, I AM talking about Sasquatch, or “Bigfoot” as he is known by his friends.

Well, noon came and went and I still hadn’t caught anything. 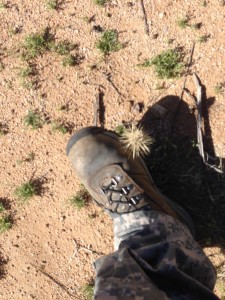 I did get a chance to shoot at a bobtail rabbit and while at the most I ruffled it’s fur, he lived to see another day…assuming I didn’t give him a heart attack.

We decided to cut our losses and head back. As they say, “a bad day of hunting is better than a good day of work…unless your buttcheeks are rendered numb by sitting on an unfortunately shaped rock.”

Anywho, it’s about dinner time. I had better head off to Fry’s. I’m hunting for ground turkey and something tells me THIS expedition will be slightly more successful. Better get on my camouflage!

No Replies to "Ima goin' hunting!"