I’ve recently  joined the 21st century by purchasing a sweet electronic device. And I am not talking about an electric can opener. No, I got a “smart phone” as the young whippersnappers say nowadays. The iPhone 4 to be exact. This sweet little device has completely transformed my life*. (*by “my life” I mean the way I place and receive phone calls and periodically check email) Despite the many benefits of owning an iPhone, I was initially hesitant to take the step for many reasons:

Applications: for those of you who are new to the smart phone segment, applications are the programs you add to your phone to do things. I was naturally hesitant to jump on the application bandwagon as applications always had a negative connotation to me as they usually preceded job interviews. If there is one thing in life I look forward to less than a root canal, it is a job interview. Or maybe a John Mayer concert. Regardless, there are a myriad of applications to choose from, many making life easier by enhancing productivity. (societal interaction tip: Unless you want to be taunted incessantly by everyone born after 1990, you must refer to applications as “apps”) For example, there are apps that make your phone act as a level, apps that provide GPS navigation, and apps that help you save money at the store. Of course my favorite apps are ones that show me funny pictures or ones that make fart noises on time delay (perfect for pranking).

It is an Apple product: Despite the fact that my first meaningful experiences with a computer came on an Apple in 6th grade (I did actually use a prehistoric Tandy, but that was not so much of a computer as it was an apartment-sized calculator without the ability to graph) I have been resistant to joining the Apple bandwagon. Primarily because, given two identical products with the only difference being one is for a Mac and the other is a PC, the Mac will be the product requiring you to take out a second mortgage to purchase. I understand the premium in price is due to increased quality, reduced risk of viruses, and the lack of the blue screen of death common to PCs and blah blah blah. All I can say is that if I have to pay $48 for a new power charger/cord kit, that stupid kit better be made of solid gold. (societal interaction tip: do not , under any circumstance, disparage Apple in the company of anyone involved with music in any capacity lest you wish endure a geek verbal lashing)

Service: The final drawback is the fact that the iPhone is only (legally) available through AT&T. Complaints that I have come across in my minutes of research for this blog focus on AT&Ts coverage (or lack thereof) and the lack of an unlimited data plan (for those of you unfamiliar with what a data plan is or why you’d want it to be unlimited, google “difference between cellular data pla”…on second thought, if you don’t know what a data plan is, ask your grandkid). Having now had AT&T for two months, I can safely say I do not share the same concerns. The coverage I receive on the phone is just fine. You may want to put that in the context of the fact that my last carrier was T-Mobile. I am just happy to have a single conversation in fewer than four dropped-call related increments. And while the plan I have subscribed to is not too cheap, it is in line with similar plans at other carriers and I get a slight discount from work. Thus far I have not used more than a quarter of my allotted usage. I am sure that will change once I stumble across a website dedicated to pictures of animals in costumes. That would be hilarious! (on second thought, I think I have the next internet phenomenon! Do me a favor and email me any pictures you have of animals – the more gangly, like an alpaca for example, the better – in costumes. I uh…just want to look at them..yeah, that’s it!) 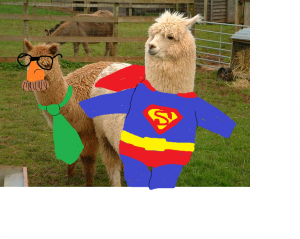 (Seriously, tell me you wouldn’t spend ALL DAY surfing pictures like this!)

Well, despite my apprehensions, I am completely sold. This little thing is amazing! Silly me, for years I relegated myself to using my phone to only do things like make phone calls. Who needs phone calls now that I have this sweet phone?! The possibilities are endless with this device. I can read virtually any book on the planet, identify songs I hear by simply letting the phone listen, and squish virtual bugs. I have the entire world at my fingertips! There is more information in the palm of my hand than anyone could have even imagined not 40 years ago. And yet I spend most of my time making myself look fat in pictures, looking for the nearest Starbucks, or checking Facebook.

I do plan to use my phone for more productive things in the near future. From what I hear, there are something like 70,000 apps available for the iPhone. The only problem is trying to find apps that are applicable to me. Every time I go to search for new apps, the only keywords that come to mind are “Batman” or “Airplane pictures”. So, if anyone has any good app tips, let me know. We can do an app idea exchange. (perfect idea for an app!!)

With all this time I have spent utilizing the apps on my phone, I really should check out it’s phone capabilities. I hear you can use other apps while on the phone and it’s got an easy to use interface. Yeah, I’ll do that as soon as I check my Facebook page.

No Replies to "iPhone4"