Vegas with the Boss!!

Before I get too far into this blog I wanted to give you a heads up. I am ridiculously tired for reasons you will see in the following blog. However, I am an innovator and for that reason I am trying something a little out of the box. Rather than wasting time being unconscious by napping, I am alternating naps for each side of my brain while maintaining overall consciousness. The impact to this blog should not be noticeable at all. However, keep in mind that one side of my brain is a little more logical while the other is more creative.
On 2 January 2014 at 13:55:00 pm my spouse Karina Varner and I boarded a Southwest aircraft to fly to Las Vegas, Nevada for a recreational trip. (Snort) My beautiful life partner and I were being whisked away to share time reigniting our love, the bond that flows through our hearts, intertwining our souls like a misty mountain stream.
Okay, I feel much better. As I was saying, my mom graciously offered to watch our children while Karina and I spent a few days in Vegas to celebrate our 12th anniversary. Yay! Vegas trip with my boss!
We flew out Thursday afternoon and had a return flight scheduled for Saturday morning.
Our adventure started in line at the Tucson airport. I had checked in online the morning prior in order secure an early boarding position. Once we got in line, I began looking at all of the people in front of me who had managed to check in quicker. Many of whom appeared to be ¾ of a decade old. These people are all better at the internet than me! 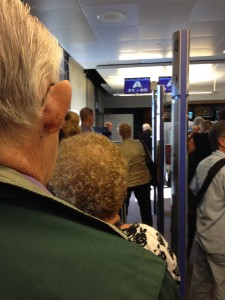 To make matters worse, when Karina reached behind her to access her pocket, she “accidentally” groped the gentleman behind her. She was mortified and apologized. He seemed rather ok with it. 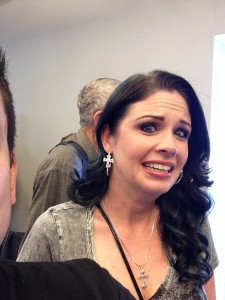 Once we got in the plane Karina’s offensive antics calmed down and our flight was uneventful. 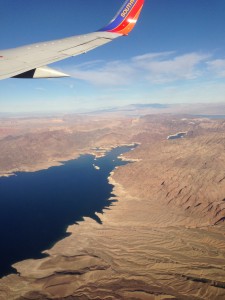 The only thing we had planned was a dinner at The Top of the World restaurant on top of the Stratosphere. The Stratosphere was where we were engaged back in September of 2001.
For people who have never been to Vegas, the first thing they often assume is there must be a clothing shortage…but only for ladies and greased up men (except there is an abundance of bow ties thankfully). One particular truck kept driving up and down the strip, it’s sole purpose to ensure as many people as possible saw the three ladies pictured on it’s banner who clothes were accidentally falling off. They must have been embarrassed…and cold. I tried to call the number on the truck to offer my assistance but the nice ladies insisted they wanted to assist me. Not having any projects requiring help, I thanked them for their kind offer and continued on.
Our dinner at The Top of the World was great. It was very fancy and $$$$ according to most restaurant reviews. However, since we had reservations to the restaurant, we didn’t have to pay the $18 per person admission to the top of the tower. And for that privilege I only had to pay about $100 for each of us in food! Take that Vegas!!
One of the things I love doing from the top of the tower is looking for a random car driving around a few miles away. They aren’t thinking that someone on the tower is watching them at that moment but I love knowing I am making them WRONG 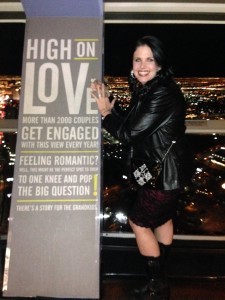 Not as clever proposing up here as I had thought. According to this statistic, approximately 6 people do this per day

Karina and I aren’t your typical Vegas visitors. We aren’t big gamblers and we don’t generally watch the shows. We also aren’t into getting drunk and partying all night. We just like to walk around window shopping and people watching. And we did A LOT of walking. Over 23 miles over the 48 hours or so that we were in town. In fact, had we just decided to start walking to Vegas, this is how far we would have gotten: 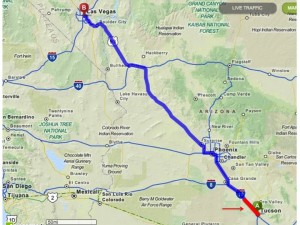 So, while there are many, many traits of Karina that I adore, her penchant for ensuring we end every vacation with blister covered feet is not one of them. Occasionally we would stop and I would blend into the typical Vegas crowd like a chameleon. Once, while I was standing outside of a neon-bedazzled Walgreen’s on the Strip I was approached by a gentleman who said “what’s up”? I was caught off guard and responded by saying “how’s it going”? He kept walking and said “I can tell you’re a cop.” I assume he could just sense my aura of authority and it had nothing at all to do with the fact that I stick out like a sore, rigid, conservative, dull thumb among the drunk Vegas crowds.
One of my main goals this trip was to encounter a celebrity and take a selfie with them. I am sad to say I failed on the totality of the goal. However, I did encounter a few celebrities. Leon Spinks (a former boxer) was sitting in a sports memorabilia store selling autographs. Although he was doing more “staring into oblivion” than actually signing any autographs. I am not sure what he was charging for autographs, but frankly, walking 8 feet to his table would have been too high a price to pay. 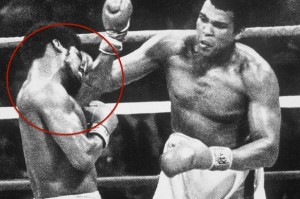 We also passed by a taping of the A&E show Bad Ink. I was yelled at by the producer for taking a picture with flash. I am never washing these eyes again! 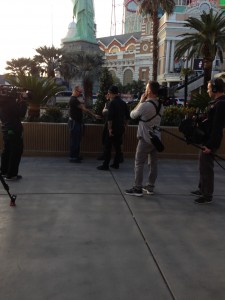 Speaking of pictures with celebrities, one thing I noticed this year that seemed different from past trips is the number of costumed characters offering to be in your pictures for tips. These folks buy or make costumes slightly resembling famous characters (ie. Transformers, Mario & Luigi, and Minnie-Mouse-with-a-unibrow). I don’t want to insult their livelihood, but I wasn’t impressed with the quality of their costumes. I doubt they would fool Ray Charles. And, while at Disneyland the cast members are extremely careful not to ruin the illusion, these folks are taking off their costumes to take a break every which way you look. Some of the magic is lost when Hello Kitty removes her mask to reveal “she” is a 55 year old named Pedro. 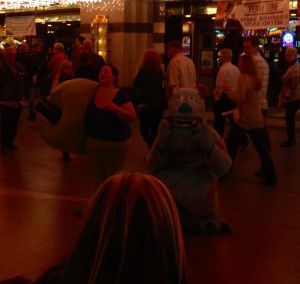 As I mentioned before, we are not big gamblers. We did throw a few dollars into some slot machines at Treasure Island. At first Karina couldn’t lose! She was swimming in pennies! 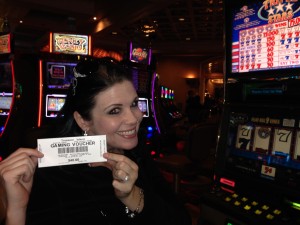 But, not more than 3 minutes later, she had lost it all. 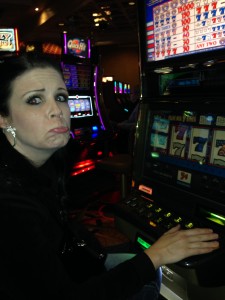 Wanting better slot machine odds, we VERY CAREFULLY googled “loosest slots”. It turns out some of the older casinos have better payouts. We tried some penny slots at the Golden Nugget and I made $25 on a single $5 bill. It is the best investment around!! Next time I am taking my life savings as that return is slightly better than the stock market.
We also stopped to play craps a few times. 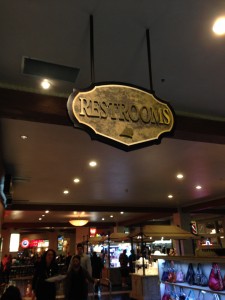 One thing we always like to do in Vegas is hit a buffet. Last time we tried The Orleans and it was fantastic. We decided to again turn to Google and ask what the “best buffet” is. The answer in descending order was Jimmy, Warren, and the buffet at The Cosmopolitan. It had received overwhelmingly positively reviews. This buffet is called the Wicked Spoon (I thought that was an Olympic high diver move).
On our wayto the buffet I stopped to wash my hands at a fancy restroom in The Cosmopolitan. Per the sign, rich people are weird. I figured the restroom was either for people suffering from leg length inequality (LLI) or one must pose like a flamingo. I am just glad I was only washing my hands. Not sure how I would have handled some other business on one foot.

We arrived at the buffet and my first thought was that this buffet had BETTER be good as it was, how should I put this? Expensive. And it did not disappoint. I have no idea what half of the foods I ate were but they were amazing! 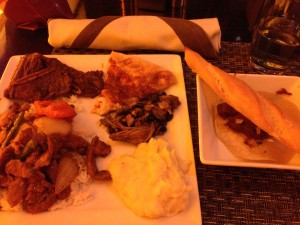 I have no other way of describing it than to say it was as if a cherub was frolicking upon my taste buds. Here is an attempt to capture that taste in pictorial form. Unfortunately due to copyright reasons, I couldn’t put any pictures of cute cherubs but this will do: 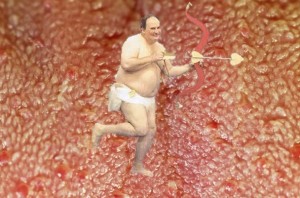 After two servings Karina and I were struggling. We wanted dessert, but there was literally no room left in my body. I had to decide between gelato or keeping nonessential organs. I chose gelato and it was delicious. Although I felt as if I was about to pop. That is exactly the way to leave an expensive buffet though: uncomfortable and full of regret.
On our last evening in Vegas we decided to head up to the north strip (also known as Downtown, or The Ghetto Strip) as we hadn’t been there in a while. As I am a man, I ruled out using any sort of a map program to find it. Surprisingly, I struggled. After a few wrong turns and an inadvertent trip on a freeway I began resenting that pompous jerk on the Stratosphere who was probably watching and laughing at me right then.
I suppose this as good a spot as any to provide a brief review of our rental car. While I had no problems with the brand new Kia Optima, Karina was less than thrilled. The passenger seat is ridiculously low and cannot be adjusted higher. So Karina had to strain just to see out of the window. This did have a positive effect on the level of backseat driving I experienced. 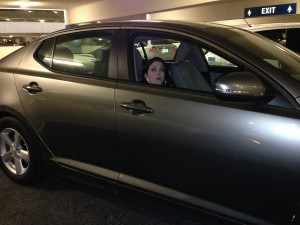 We had a frozen daiquiri and strolled Freemont street. This is also where I hit it big at the Golden Nugget (this is a semi-chronological blog). 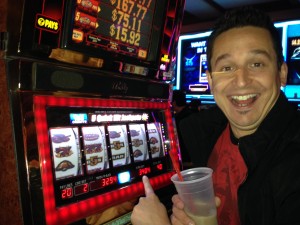 After a busy day and a half we were anxious to get back home to our kids. We left for the airport at 8:30 in the morning in preparation for our 10:55 flight direct to Tucson. When we tried to check in, we found out our flight was cancelled. The kind Southwest representative said the only flight she had that would get us home that night was one going through San Jose and San Diego. Not wanting to be out the money I had paid for airline tickets I gladly took the lady up on her offer. The problems were that there was a 5 hour layover in San Jose so we would need to get our bags and check in again, also, the flight wasn’t supposed to arrive in Tucson until 8:55.
Well, nothing is never that easy. Several more delayed flights and trips through security [It feels like my most intimate lumps and crevices have been reviewed (and approved) by half of the entire TSA force] saw us finally landing in Tucson at 12:15am. Many of my kind friends have told us we should have just driven. I am definitely not being sarcastic when I thank you for that recommendation. I just hope you use your powers of hindsight for good. Also, I’m thinking on taking a cruise on the Titanic’s maiden voyage. Would that be a good idea? 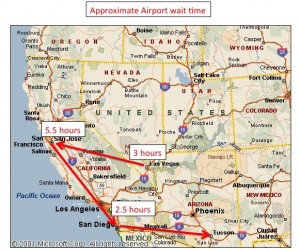 We did have fun regardless and I was able to watch a decent movie (Ghost Writer). We also learned that Karina’s blingy jeans do arouse the suspicion of the TSA staff and make their monitors light up like a threatening Christmas Tree.
We made it home though and I got to bed at 1:30in the morning. I did have to wake up at 6:30 which is why I am a bit tired and in need of intermittent alternating brain side naps. So I will go ahead and rest one side now.
This is the conclusion of my observations.

No Replies to "Vegas with the Boss!!"