The life of an Outlaw

As much as I know that this will pain my friends and family (especially my mom), I have something to get off of my chest: this polo! Good heavens it’s stifling in here! Going with an undershirt makes complete fashion sense, but the additional heat is a burden that almost makes it not worthwhile. Also, I have something to confess: I recently became a hardened criminal. What was my crime you ask incredulously? Armed robbery. (And you could stand to be a little less incredulous. Quite frankly it makes you a bit of a downer)

Thankfully the DA (or District Attorney for those of you who don’t watch Law & Order) in my case hasn’t put two and two together yet to come to that conclusion. Currently they only have me pinned for, as they call it “Parking Violation”. Well, let me tell you, there most certainly was violatedness. I apparently took two meters in my van on a recent trip downtown. As I see it, that means I stole a parking space (albeit temporarily) whilst in the possession of a deadly weapon!! And by deadly weapon I am obviously referring to our van. Never has a clearer case of armed robbery occurred, except if you count numerous bank robberies accomplished with guns/knives/flamethrowers/throwing stars. That’s right, don’t act like you know me because YOU DON’T! I am a street-hardened felon who has no respect for authori…oh crud, just a second, I have to make sure my library books aren’t overdue….…and we are good. Crisis averted!

I received my citation last month in downtown Tucson. Karina and I took the kids to the Tucson Children’s Museum for, as we had planned it, an afternoon of learning and merriment. We saw some good parking spots available directly across the street from the museum. As with much of downtown, these were parallel parking spots with meters. There were no markings in the road (clearly indicated in this Google Streetview picture of said parking spots) 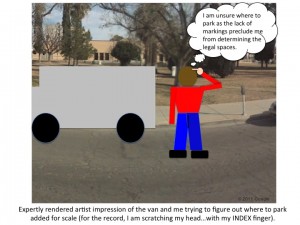 so Karina and I discussed and decided that I should park alongside the meter to ensure we were parking at and paying the appropriate meter. Now, I do not mention Karina to pass along any of the blame in this situation. I mean obviously I took her comments into very serious consideration, and her and I jointly own the van, and she can be very persuasive sometimes, but I would never ever even insinuate that SHE WAS TO BLAME. In all seriousness, she was not.

Regardless, we parked (even paying for twice the time we ended up needing – I had better keep that on the down-low lest I have “feeding meters” added to my substantial list of a charge), enjoyed the museum and came back to a ticket on our window. When at fault, I have no issue facing up to the consequences and reconciling the issue. This time however, I felt I was taken advantage of. As there were no markings, I was being required to follow a set of nebulous and unknown rules, most likely to fund the donuts at a meter maid luncheon or something.

Well, I returned my ticket marking the “request a hearing” box so that I, in the interest of defending my principles and really exploring the justice system in our country, may plead my case before a judge. I was also hoping they’d just dismiss my citation to save money on the hearing. Well, BACKFIRE!! I got my summons the other day. On September 6, guess who’s supposed to go before a judge to plead his case? This guy!!

I still have not decided how I am going to handle this situation. As I see it, I have two options: roll over and pay the fine, or go to court and fight the man! On one hand, paying the fine alleviates the hassle of this situation. And while going to court has the potential of getting me out of the fine, I would have to practice my defense, print up some large pictures (large pictures are a must at trial – according to Matlock), spend probably close to a citation’s worth of money on gas to get downtown, not to mention I would have to iron a shirt. And there is also the distinct possibility that, in an attempt to defend myself, I completely humiliate myself by stammering, turning red, hyperventilating, fainting, and then vomiting on myself. Not to mention I just found out that, were I to lose in court, I have to pay an additional $40 in court fees!! For some reason, it seems like the system is stacked against trying to defend myself. Looks like I had better get to the rolling over.

Of course, all of this goes out the window once the state realizes my major armed robbery offense. I just hope I look good in stripes, or is it orange now? Maybe it’s  orange stripes (for some reason I have a strong urge for some orange sherbet). If I get locked up in Sherriff Joe Arpaio’s prison, I’ll be forced to suffer the embarrassment of wearing pink underwear. Thankfully I am already conditioned to that from the time my U of A t-shirt snuck into my load of unmentionables (which I have ironically just mentioned).

No Replies to "The life of an Outlaw"