No pain, No gain

It seems that a lot of people recently have been blogging about their personal fitness progress. I think this is a fantastic idea as it adds accountability from all of your friends and also gives one the opportunity to brag about successes. I like the idea so much that I’ve decided to (periodically) do the same thing.

At this point you may be asking yourself why in the world I would feel the need to embark on a fitness journey. After all, you are most likely thinking to yourself “he already has the body of a Greek god.” And I agree with you 100%. Of course the Greek god I most closely resemble is Mathematicalese, god of the Net Present Value Calculation. I may have mislead many of you years ago by posting the following picture on Facebook: 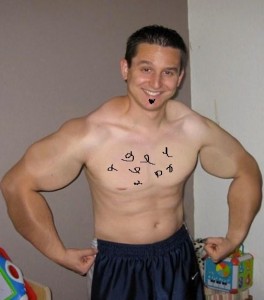 This will come as a surprise, but I feel the need to get this off of my chest. That picture is a lie. At no point did I ever look like that. Although I have cried many a tear at night wishing for the glorious chest hair in that picture, alas it was not to be. Oh, and there may have been a few other touchups in Photoshop involved in that picture.

Unfortunately my diet (or lack thereof) and sedentary lifestyle have lead to a steadily increasing beer belly. In my case, a more apt description would be Midori Sour belly. I’ve always wanted a nice 6 pack but was hesitant to put the work into it. For a while I considered purchasing the AbHancer: 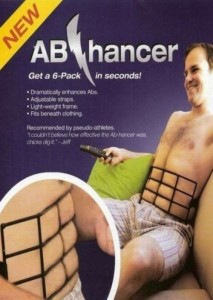 I was a little too cheap to fork over the money though. Plus that thing looks constricting. How would I ever fit adequate amounts of hamburgers, chips, and cake in my belly wearing that?

For too long I’ve been putting off my fitness goals. I’ll walk on the treadmill for about 20 minutes or so every once in a while (this is as long as my attention span will literally let me walk in one place) and go out and shoot baskets down the street. But my regimen has only been delaying the steady progress made by my belly.

Last week though I made a change. My friend Darrell has been doing the P90X workout for a few weeks and he invited me to join him. I knew only two things the P90X workout:

Now I didn’t understand the reasoning behind working out in a tent, but I figured it had something to do with a sauna effect. I love camping as much as the next guy though so I told Darrell I’d commit to a week of P90X to see if it was something I could keep up. I went to sleep Sunday evening dreaming of the fun I was going to have all week long! 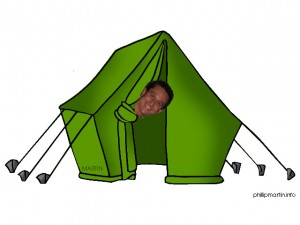 Here is a nearly literal representation of my dream Sunday evening.

Yesterday was our first day of the regimen and I knew immediately when I showed up that I had made a mistake. A terrible, potentially painful mistake. When Darrell saw me he gave me a look that said “oh crud, I was really hoping you weren’t going to show up as this means I must now do P90X.” Add to that the fact that there weren’t any tents in the vicinity.

We started the workout with a lift-insert-press. Then, once the DVD had been put in, things got even more difficult. The program has a counter on the bottom showing how much longer the workout lasts before this session is done. It started at around 58 minutes and by the time it showed 56 minutes left I was wanting to curl up in a fetal position and cry for my mommy. But, this was the exact reason Darrell and I decided to work out together. We would force each other to commit to the workout. So commit I did. I did my best to keep up with each exercise and after about 5 minutes my legs felt like spaghetti. Thankfully I think Darrell bought my explanation for my steady stream of tears. I told him I had a rare genetic condition wherein I only sweat through my eyes. (Cutting onions and watching Forrest Gump also tend to make me very “Sweaty”).

The entire workout, which focused on the legs, seemed to have a hundred different exercises. In reality there were probably 16 that were repeated. They all kind of blurred together towards the end which I think is how the brain handles traumatic experiences. There were a couple specific ones I do recall though:

Hot foot: This exercise involves hopping on one foot in an “X” pattern. I’ve illustrated it below where the red dots represent where each hop should land. 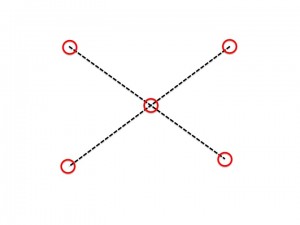 I can imagine that you are thinking this particular exercise sounds relatively easy. It may seem that way to someone sitting in front of their computer with full leg capacity, but try doing it after 45 minutes of extreme leg torture and then see how well you do. I was able to hop for at least half of the allotted minute but, seeing as how I was physically incapable of controlling my legs by this point, the pattern of my hops in no way resembled an “X”. My pattern looked more like this:

Monster Truck Tire Steps: This exercise looks like the tire run drills you normally associate with football practices. Of course, in this case the tires were imaginary. And pretending to be using normal tires in this drill wouldn’t be inhumane at all. So the demented folks at P90X decided we should imagine the tires in this drill are Monster Truck tires. Well, let me tell you, they can’t control my imagination!! (And by this time I was imagining various locales that I would prefer to the current state of discomfort I was now feeling. Places such as Disneyland, Hawaii, or being water boarded in Afghanistan) So in an act of blatant defiance I imagined I was limping through a field of Hot Wheels car tires.

After roughly 56 minutes of agony our day 1 workout was over. Darrell and I hi-fived our victory over this particular DVD. I headed home and had a big shake. And I am not referring to the actions of my quivering legs. I had a protein shake. And, after a nice, refreshing shower, it was on to the rest of my day and thinking of excuses why I wasn’t available the next morning for Day 2.

No Replies to "No pain, No gain"