Under the Dome – An Unbiased Review

I love Stephen King’s novels as much as the next guy…as long as the next guy can give or take them. For example, I find his shorter stories to be very intriguing (ie. The Mist) but many of his full length novels tend to be a bit verbose…at least I assume as I didn’t read them. Recently I found out about his novel called “Under the Dome” which had a fascinating premise. I was extremely tempted to read it. However, I then found out that the novel is LONG and, get this: has zero pictures! So, I started World War Z instead (a decision I definitely do not regret).

In the last few weeks I started to see promos for a new CBS mini series based on the Under the Dome book. CBS called their version Under the Dome…also. I decided this was the perfect way for me to engross myself in the story as I could experience it using moving pictures with my brain in the “off” position. After watching the first episode however, I was thoroughly disappointed. As is my general policy with 13 week miniseries based on Stephen King novels, I decided to give it at least two shots. And I found the result was a second wasted hour of my life. 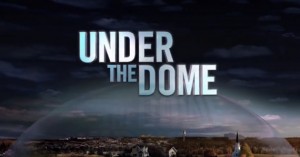 So why was I disappointed you ask? For a few simple reasons:

Acting: This is the most glaring deficiency of the show. Perhaps I have been watching reality TV for too long, but almost none of the actors are the least bit convincing. My assumption is they all graduated with honors from the Keanu Reeves School of Wooden Acting. Let me tell you, Dean Steven Seagal would be proud of these actors’ and actresses (lack of) efforts.

Unrealistic/Absurd Actions: I do realize the irony in pointing out things I found unrealistic in a show about a friggin’ dome that descends on an entire city. My imagination has a limit though. For example, when the whole town comes together to form a human chain passing buckets of water to fight a house fire, can the last guy not scoot just a few feet closer to the house so his buckets of water don’t land uselessly in the front hedges?

Also, a character whose name I will not mention because I do not remember it is imprisoned by her psychotic ex-boyfriend. All the guy wants to hear is that she loves him. Of course, simply fooling him by saying she loves him (which shouldn’t be difficult to do since he is, you know, psycho and all) would be too easy. “Perhaps her character is far too moral to lie” you say. “Maybe her integrity means so much to her that she won’t lie, even when it would benefit her” you say. Well I say “you are an idiot”. You see, rather than telling the guy she loves him, she decides to LIE and tell him she slept with another guy (in the non-restful way)! You can imagine how the possessive psycho reacts. With passionate wooden rage!

Finally, I gather Stephen King is not a fan of Christians. The town’s esteemed minister is, as always, involved in an underground meth operation. Why is it that television cannot have a “good minister” simply be a good minister? And why is it that the only functional family unit is of the alternative lifestyle? I understand that this is the cause du jour (what’s the cause du jour? The cause of the day! credit: Dumb and Dumber!) but there isn’t anything wrong with having a functional traditional family unit as well.

So, in summary, on a scale of 1 to 10, with 1 being “Only show this to your worst enemy…or mother-in-law” (j/k Diane, you rock!) and 10 being “It’s Like My Eyes Are Having a Swedish Massage”, I rate it a 3. Very intriguing premise, but poor execution. Or for you more visual folks: 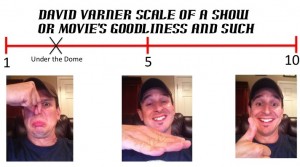 No Replies to "Under the Dome - An Unbiased Review"