While nobody has ever insinuated that I can croon with the sultry voice of Michael Buble, I do technically have just as many ears as he does so I can surely appreciate good music. Generally my enjoyment is done in headphones or my car, but I will occasionally attend a concert to see the bands I enjoy live. Recently Ashton and I had the opportunity to watch one of our favorite bands (Red) perform in Tucson.

There are a few things about concerts that are sometimes enough to persuade me from attending. For example, a lot of the people I’ve attended with have enjoyed dancing and singing along to the music with abandon. While I may be enjoying the show just as much as them, it’s hard to go crazy when the way I typically enjoy my music is like this: 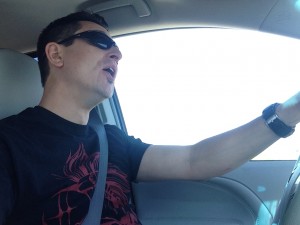 And I have been reminded enough by my wonderful, supportive wife that 3 minutes of a cow in labor would probably have just as many correct notes hit as I tend to get while attempting to sing along to the radio. So I don’t even need to ask the 8 people within 3 feet of me to know they didn’t pay to hear me. And I don’t feel like jumping through the entire concert. If I felt like doing plyometrics, I would have inserted my P90X disc. Sure, it doesn’t look like I’m having as much fun, fun but I leave smelling like a freshly washed baby’s behind and I won’t need Advil for three days straight.

And just a random aside: it always cracks me up on Facebook when my friends at a concert take a selfie of them in their seat with the caption “getting ready to watch so and so*” If you are in your seat, you are pretty much ready. The very MOST you’d have to do is turn your head slightly to center the stage. So may I suggest changing the caption to “Ready to watch so and so”?

* “So and so” is a general phrase to capture the breadth of performers one might be attending. For example, it could represent Justin Timberlake or the Beach Boys…scratch that. I doubt someone attending the Beach Boys would have the technical savvy to check in on Facebook.

Can you help me find the "Upload to Facebook" button sonny? Marge will never believe I’m watching Dion and 2 out of the 3 Belmonts!

So, back to our concert. As I mentioned, we were watching Red, a hard rock Christian band. We headed up with a couple of good friends (including my buddy Dave who is a prolific, talented writer. You can check out his thoughts and adventures here.). It was to take place at Club Congress which I had been to once before. The one time I had been there I do not recall it being “roomy”. I DO recall forcing myself into a fetal position to squeeze in. When we arrived, my memories were proven true.

– Now, I’m not saying the venue was small, but I think the floor plans were designed by Mattel.

– Now, I’m not saying the venue was small, but it was like being packaged like sardines. Except sardines have some breathing room.

– Now, I’m not saying the venue was small, but the maximum occupancy sign said “Jeff”.

The last time we had seen Red perform it was at a giant Christian music festival in Phoenix held in the arena where the Suns play basketball. If I had been this close to the bands then, I would have been wearing a shirt that said “Security.”

People continued to stream in as we approached the concert start time. It was then that Ashton made an amazing observation: all of the tall people were at the front leaving the shorter people inexplicably in the back. I can only hypothesize that punctuality increases as a function of height. 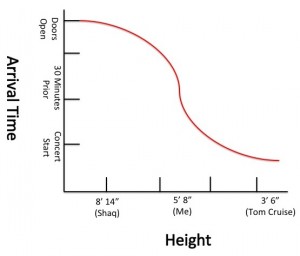 Or perhaps watches function more accurately in an environment farther from the center of the earth’s gravity. One cannot be sure.

By the time the first band started, Ashton was wedged between three people with a sterling view of each of their armpits. And he wasn’t alone in the struggling-to-see department. The guy in front of me was either a distant relative of Andre the Giant (perhaps he was Andre the Abnormally Large?) or he was practicing on stilts.

At least we had great sound when the music started pumping. This was a bit “harder” of a concert than we normally attend. These bands often employ the “about to die” scream in their songs. Normally screaming bands are not my thing as I get enough of that when I announce bedtime at home. However, I thoroughly enjoyed myself. Disciple was great and I even sprung for a t-shirt from Spoken.

My favorite band as expected was definitely Red. They played many of their hits as well as a few new ones I really enjoyed. I felt as if they were singing to me as I was only about 12 feet away from them. Thankfully just outside of the (very literal) spit and sweat zone. (“OMG! I just got a stomach bug from Red! I am the luckiest boy ever!”)

As much as I enjoyed the concert, there were still a few things, common at most concerts, that irritated me. For example, the bands always ask “how are you doing Tucson?” Listen! I paid $25 for you to entertain me. Not to take a pop quiz. But I’m fine. Thanks for asking. That’s not all, throughout the concert they continued to badger us with questions like “are you having a great time?”, “are you ready to get loud?”, etc. I am way too logical for these types of apparently-rhetorical questions. I always try to yell “yes, I am prepared to do as you ask!” but the crowd never fails to drown out my answer with “AAAAAHHHHHHHH!!!!!” Which is apparently the correct answer to any question asked by a band member. (Unless you are talking with them backstage after the show….whoops). Have these inane conversation always been a part of the concert experience? Mom, dad, did the Captain and Tennille always ask how Tucson was doing? Or did Tom Jones ask if people were ready to “get loud?”

The other thing that is becoming more of an irritant is everyone holding up their phones to get pictures or record entire songs. My iPhone (often mocked as tiny by uninformed Droid apologists) is far less rude than the idiots holding up their Galaxy with it’s 55” screen size.

My uselessly large screen size will allow everyone here to know I am a Droid fan and therefore have all the newest features cell phones have to offer…for the three weeks my phone will function properly.

Now this might be hard for some of the more “experienced” crowd to understand as there wasn’t the same proliferation of cell phones 30 years ago. So, to provide an analogy, it’s like sitting down right behind a lady in a Sunday hat (or Pharrel’s) at your Donny & Marie concert. 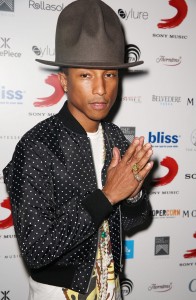 Now, many of you may have noticed that this blog contained the names of a few popular music acts both in the past and contemporary. You may even be thinking that I did this with the shameless intention to get my blog ranked higher in search engines. I admit…I was guilty of this in the past. But, I am better than that now. Besides, I only referenced a few contemporary acts. If I was THAT desperate for clicks, I would have thrown in additional relevant names like Beyoncé, Jay-Z, Robin Thicke etc. Heck, why would I limit it to music?! I’d put actors too, like George Clooney, Channing Tatum, Channing Tatum shirtless, Channing Tatum Magic Mike etc.

So, I hope you feel bad about your judging me. And I am glad that you didn’t have a great time at the Red concert like I did (with the obvious exceptions of my friends who were there).