Those of you who know me well know that I have always been a hunter at heart…a BARGAIN HUNTER! But that skill will serve me no purpose during the inevitable zombie apocalypse. So, in a continuation of the pursuit of manly hunting skills I began last year (You can read those exploits here: http://dave.varnerific.com/2014/03/10/ima-goin-hunting/) I recently sat out on another hunting excursion (or is it an Expedition…I can never remember which model of Ford SUV is appropriate here).

Previously I’ve spent my time hunting for mountain lions and coyote, but this time I was drawn for javelina. This means, for one week, I could take one by whatever means necessary: archery, handgun, rifle, strangulation, waiting for old age to render it’s inevitable verdict, etc. (“Take” is hunter slang for “viciously murder”).

Now it would be rude of me to assume all of my friend reading this know what a javelin is. For the benefit of anyone else reading this (I’m talking to you NSA), I’d like to provide a little background information on the javelina. That way this blog is informative and not a complete waste of time. I did a lot of research getting to know my prey and now you can consider yourself the benefactor of said research.

The javelina is actually a colloquial terms for the animal known as a Peccary (or Skunk Pig). The “pig” moniker is deceptive as they are not so much a pig as a really large rodent. However, the “skunk” part of the nickname is particularly apt. Consider this from Wikipedia:

“Peccaries have scent glands below each eye and another on their backs, though these are believed to be rudimentary in P. maximus. They use the scent to mark herd territories, which range from 75 to 700 acres (2.8 km2). They also mark other herd members with these scent glands by rubbing one against another. The pungent odor allows peccaries to recognize other members of their herd, despite their myopic vision. The odor is strong enough to be picked up by humans, which earns the peccary the nickname of skunk pig.”

Now I love ALL of God’s creatures…except, of course, the ugly ones. And javelina are the stuff of nightmares. Take a look at some of the pictures I found: 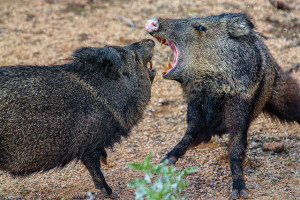 Look at that beast! I can’t rule this out as being the legendary chupacabra.
Just look at those teeth! Quick tip: Don’t search for “Javelina Bite Wound images” while eating! (or “Oozing infection” either…you can consider that a lesson learned) 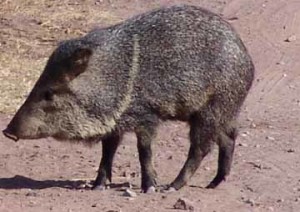 Ok, the javelin doesn’t look too bad in this picture. But you can’t let it fool you. It is a stinky, appendage-maiming machine! 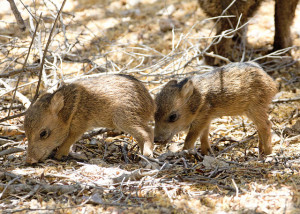 Oh my goodness: CUTENESS OVERLOAD! Once I saw this picture, I knew I wouldn’t have the heart to shoot this animal. So I had to take some drastic measures. I knew there was only one thing to callous my heart enough to hunt the javelina: an episode of Animal Fight Night. Watching this show would no doubt steel my heart to the brutal reality that is nature.

Initially, I did struggle reconciling my emotions to my human craving for delicious meats.

But eventually I fought the compassion and channeled it into nausea.

I also decided a good way to prepare myself to take the life of this creature was to make myself hate it. To that end, I decided to invent a Liam Neeson-esque backstory about the rodent: That pig stole my daughter and forced me on a cross-country trek for revenge! (You must think this next part in Liam Neeson’s gruff, Scottish-infused voice) "Well, I have a certain set of skills, and while those skills are mainly Finance-related, I also have an unquenchable desire for retribution."

Feeling mentally ready to hunt, it was time to prepare the supplies. I had most of the gear from my previous hunts. However, our goal with the javelin was to clean it in the field and bring it home to eat. Knowing “cleaning” an animal is anything but clean, I decided to bring the appropriate clothing for the task:

Thinking I was ready to go, an image of my prey flashed in my mind: 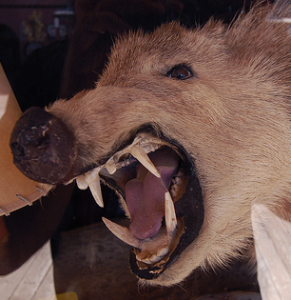 And I realized I may have to sacrifice a little of the stealth afforded by camouflage in exchange for the security of this:

On the morning of our hunt, my Uncle and I set out early in an attempt to be in the field at the break of dawn. We reached our desired location just as the sun was coming over the hills and the light revealed traces of our quarry: 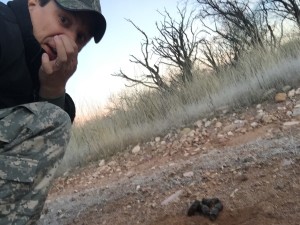 This javelina poo was so fresh I doubt he was even done wiping! We knew for certain that there was one (very relieved) javelin in the immediate vicinity.

We found a nearby wash to begin walking in search of scat originator. However, after only a few minutes, we realized we weren’t going to make much progress. The wild grass was so tall and thick, anything shorter than Sasquatch was safe. I literally wouldn’t be able to see a javelina until it was about 3 and a half feet away; which is about 800 feet closer than I am comfortable with. 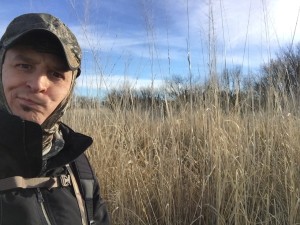 So our next tactic was to silently creep to the top of a hill and “glass” the surrounding valley. This entails constantly surveying the land with binoculars waiting for movement. As you can imagine, this is a silent, calm endeavor. I had plenty of time to really get to know myself. And I am boring! After about 6 minutes my mind was wandering and my eyelids were getting heavy. Which can only mean one thing: selfie time. HOLLA! 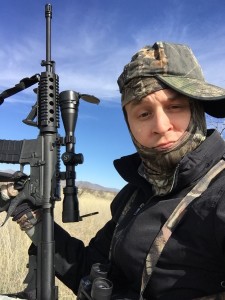 This is me and my trusty (in theory) pig annihilator

After about an hour and a half of sitting on the hillside literally watching wild grass grow, we decided to look for more signs of javelin and use our well-tuned tracking skills to no doubt stumble upon a herd of javelin. We went to several different areas, walking for mile after fruitless mile and didn’t find any fresh tracks. By around 2 in the afternoon, we decided to cry mercy…errr….I mean, give our javelin prey a generous break by heading home.

Despite a day of searching for javelin, still the only time I’ve seen them in the wild was at the park by my house. 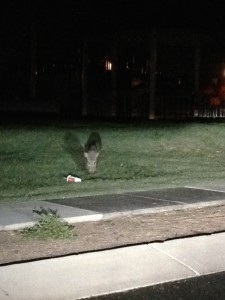 However, in only one day of javelina hunting I managed to take as many as the total coyotes and mountain lions I’ve got on all my previous trips…combined! BOOM!

No Replies to "Javelina Hunt!"