I was mauled by a dog!

I had a very interesting night for a Tuesday last night. It involved getting bit by a ferocious beast and a trip to Urgent Care. I should have said “Spoiler Alert” before that last sentence.

A little background on the situation: our two female dogs Flopsy and Lani HATE each other with a passion. You may say, “well David, that’s why you don’t get 2 female dogs.” To which I say: WHY DIDN’T YOU TELL ME THAT TWO YEARS AGO?! As soon as Lani became full grown, they began antagonizing each other to the point of attempted death matches every 4 months or so. And here I thought that unceremoniously removing their uteri would resolve all negative female traits…Uh, I mean….of which there are no such thing…lovely wife of mine. We have had a few hefty vet bills due to one or the other getting the best of each other, but recently we have been tending to the wounds ourselves when necessary with leftover antibiotics. On Friday evening, the two dogs got into it with each other when their excitement over our return from a day in Phoenix became too much for their poor, feeble brains to handle. They latched on each other’s faces and, after a brief simultaneous chewing match, Karina and I were able to grab their rear legs and separate them. 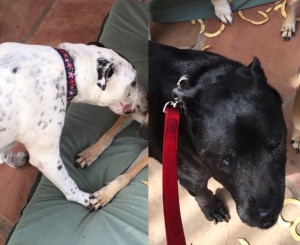 Post-injury pictures. Lani is on the left and Flopsy on the right. Flopsy’s face swelling went away quickly (it’s making her eye droop) but she had a lump on her cheek.

However, as dog mouths are festering pits of bacteria, Flopsy soon developed an abscess in her cheek where she was bit. Based on previous visits to the vet, I know the following conversation would occur (because it has literally happened before already):

Vet: Hmmm, that is bad. We will need to sedate her, cleanse the wound, and stitch her up. That’ll be

Me: No thanks. That’s pretty steep. I wouldn’t pay that much if it was my son.

Karina, our family’s designated snot wiper and earwax cleaner (due to my weak stomach) actually thought it would be interesting to try to drain the abscess ourselves. After purchasing some homeopathic dog sedatives online and properly researching the procedure with a 7 minute YouTube video, we were going to perform the disgusting operation last night. That is where the adventure started. I was attempting to guide a partially sedated Flopsy up the stairs to our bathroom as that’s where Karina had set up the “operating room”. (Let’s be real here: it was so I was close to the toilet when my uncontrollable vomiting started upon hearing Karina say “Ok, now I’m going to poke it.” I grabbed Flopsy firmly by the collar and started heading upstairs. Flopsy, already a bit leery about the goings on started to pull back and whimper which apparently is dog talk for “Lani, your mom wears little dog army boots.”

Now, unlike a boxing title bout where there is months of pre-fight buildup, hours of analysis on fight day and extensive introductions before 10 rounds of a masculine waltz, I got zero warning. 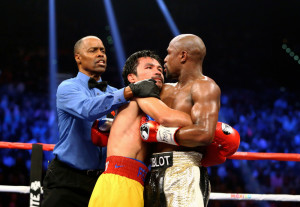 All of the sudden Lani was attacking Flopsy and Flopsy, whose collar I still had, began fighting back. It was in that moment that I accidentally broke the cardinal rule of dog ownership. No, not “don’t let a dog lick your face because it’s like making out with their butt.” I mean “don’t ever get in the middle of a dog fight.” After all, they are crazed, instinctive fighting machines in their natural, adrenaline-fueled element. Not unlike ladies on Black Friday. Well, before I could exit the eye of the dog fight, Flopsy briefly caught my left leg in her mouth. I hope I tasted disgusting!

Once we broke the dogs up, I was able to assess and tend to my wound. I figured it would be fine with a kiss from Karina and a SpongeBob bandage. However, as I began to inspect it, I realized it was slightly fleshier of a flesh wound than I first realized. If you’d like to know how I figured that out, use your cursor to highlight the paragraph below. However, if you like to keep your lunch inside your body, just go ahead and cruise on by.

As I inspected the booboo I saw what looked like a flap of skin. Thinking I’d remove it to reduce places for an infection to hide, I gave it a firm tug and to my surprise, it came out quite easily along with some more if the same substance. It didn’t take long for me to realize this was my carefully grown and cultivated leg fat!

I averted hyperventilating by a narrow margin and went downstairs to tell Karina I was going to Urgent Care after I helped with the access draining. I was primarily concerned with infection and the havoc that could wreak. I’d hate for one small puncture wound to lead to the amputation of my leg due to a lack of proper medical care. I don’t want to lose my left leg. It is my second favorite leg of all time. In fact, I’ve known it for nearly my whole life (there was a brief moment I had no clue it was there, but then I discovered it’s presence at 3 weeks old).

So I gamely assisted in the drainage with Flopsy. My responsibility was to hold Flopsy still which was designed as much for me to hug her for my support as it was for her. I was able to avoid seeing any of the procedure and was glad because at one point Ashton (the flashlight holder) exclaimed: “it looks like catsup is coming out of her face!”

So I headed up to Nexcare Urgent Care next to the Harkins Theaters in south Tucson. The staff was very helpful and professional and they carefully and calmly explained the situation everytime I asked “give it me straight doc, am I going to die?” (they usually said “sir, I’m the receptionist, please just fill out this form.”) My remedy was threefold: a good cleaning by a nurse, a prescription for antibiotics, and a tetanus shot. (I am not sure if she heard “I was bit by a female dog or “I stepped on a nail in a log.”) 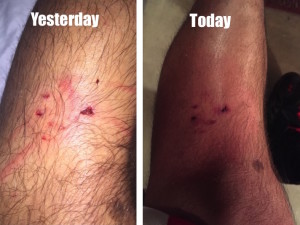 This is after it was cleaned. I swear there was a lot of blood.

My leg is a bit red and tender today but I am taking the medication as needed so I am optimistic that I won’t need to start shopping for wooden legs. 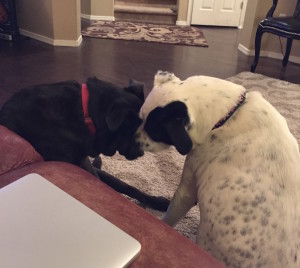 They can be nice when they want to