The life of a fisherman

As many of you know, I am your typical outdoorsy hunting and fishing kind of guy.  Except I prefer to do my outdoorsy stuff in a nice polo with perfectly coiffed hair. Also, when I say “hunting” I mean it in less of the “hunting to kill and eat animals sense” as I mean it in the “hunting for great bargains on quality goods and apparel”. So it should come as no surprise that I decided to go offshore fishing with some folks from church on the 4th of July.

We drove as a group to San Diego the afternoon before. The drive was mostly uneventful except for a particularly windy section of Interstate 8. There was small debris flying around and, at one point, the driver I was following put on his hazard lights and began to slow down. He then veered slightly left just avoiding a giant tumbleweed. Because of his actions, I was able to avoid reorienting our van’s grill. It was nice to see the hazard lights used in the fashion they were intended. I was beginning to think their intended purpose was to notify all drivers around you that you are only parking in a fire lane to rent a Redbox.

We ended up getting in around 8:30 at night. After scarfing down some In-N-Out (random side note: In-N-Out, putting the number of calories next to each menu item is easily the worst business decision I have ever seen! It didn’t change the amount of food I ate, but it did increase the guilt factor significantly) we headed to Mission Beach. Now I normally am very concerned about the amount of sleep I get at night so I would not typically head out to the beach that late knowing I need to wake up at 4:30 the next morning. Being a team player though, I went along with it and learned something new as a matter of fact. I had never heard of “sand crabs” but apparently they are everywhere at the beach, burrowed underground of course. We had a jolly time finding the creatures and holding them. For those of you who are unfamiliar with a sand crab, the video below shows them in all their wriggly, writhing wonder.

After the beach, it was time to hit the sack. Most of our group was staying at a classy resort called the Handlery on Hotel Circle. I, being the budget-conscious consumer could not justify paying nearly double to stay there when I could save that money and stay at a budget hotel literally a mile down the road (for the sake of anonymity, I shall refer to this hotel with a fake name: Motel Seis). I figured I’d be sleeping anyways, it doesn’t matter whether my hotel had an on-site salon, coffee in the room, or even a working television. I had made the reservations 10 days in advance but Karina felt it was appropriate to send me the following text message not 5 minutes from when we were going to get to the hotel: “my mom said the Motel Seis on hotel circle is frequented by prostitutes. Just a heads up. It’s a dirty dive.” Needless to say, I was ecstatic to get that text. And by ecstatic, I meant terrified.

So the gentleman I was rooming with and I hop in the car and head over to our Motel. And what is literally the first thing we see at the motel? (and I cannot make this stuff up) A “lady” standing on a balcony in a miniskirt smoking a cigarette with her leg up on the railing in a manner that says “come hither”.  While this was definitely NOT what I wanted to see, I was very pleased with the hotel service. All of the ladies were very friendly. Every woman I saw wanted to know how I was doing and if I was interested in a good time. I told them “golly, I sure am. That’s why I am in San Diego!” I am not sure why they all referred to me as big boy though.

Despite the rough surroundings, I was able to get a good night sleep…and probably three venereal diseases just by using their sheets. We awoke at 4:45 in order to get on the road at 5. It took my left eye a good half hour to figure out it was time to get up and look straight ahead. I was surely groggy, but based on my favorite reality show Deadliest Catch, it’s not real fishing unless you are doing it on little to no sleep. Also, the fishing should be done on huge seas in less than freezing weather. I was sure to encounter conditions like that off the coast of San Diego so I brought a fashionable hoodie.

I boarded our vessel, the mighty Malihini, at about 5:30 in preparation for our voyage’s scheduled 6 am departure. 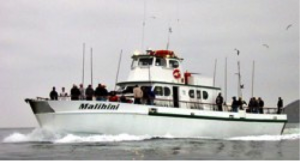 Two seasickness prevention armbands and a Dramamine patch were used to ensure my voyage would not be ruined by some nausea.

Soon we were off on our voyage. My first order of business was to place my breakfast order in the galley and start taking advantage of my all-day-coffee-for-$2 deal. Our first stop was to pick up some additional live bait.  The boat was already stocked with live squid for our use. Thankfully, the squid character on Spongebob was obnoxious so it didn’t pain me to impale the little squids in an attempt to capture fish. However, if it was starfish or sea sponges we were using, I don’t think I could have done it. In addition to the squid we were picking up Sardines and Anchovies to hopefully attract larger, cannibalistic fish. 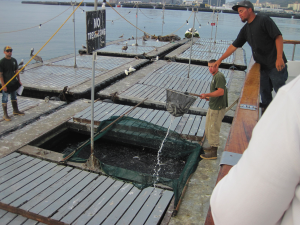 Once the boat was stocked with bait, we headed off to our first fishing spot. One of the first differences I noticed between our boat and a Bering Sea crab boat is the captain. Ours used words like “please” and “thank you”. Additionally, he did not use words that would have to be bleeped if shown during primetime. Needless to say, I was encouraged by this. I began to think I may just make it through my first trip as a greenhorn.

Our first stop was a couple miles off the coast of Tijuana. I don’t remember what we were fishing for and it didn’t really matter because we didn’t catch it. However, it was nice to just sit on the rail imagining that I may soon be bringing up a 400 pound marlin. After a half hour to an hour of donating bait to the ocean, we moved on to our second destination: the Coronado Islands. 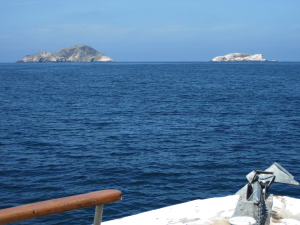 We spent the majority of our day fishing around these islands. At one point, we apparently landed on a Sculpin factory as we were pulling these fish out faster than the poor deckhands could help take them off our line. Our boat ended up catching 150 of these fish (or, keeping this many, we probably threw back 50-100 as well). The Sculipn are a reddish fish with poisonous barbs. I had never heard of these but, according to pretty much everyone, they are pretty good eating. I took the following picture with one on the line as I waited for a deckhand to pull it off. At that time I was probably 4th in line to get the fish pulled off. It literally took longer to reel these fish in from 200 feet down than it took to get one on the hook. 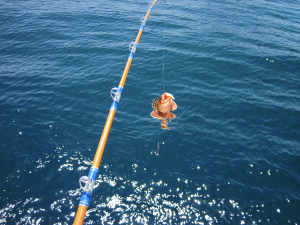 After all of us had been puling these fish in for a good 30-40 minutes, the captain announced that we needed to keep in mind our limit of 5 of any single kind of fish per day. This was certainly good to know. Thankfully, I had just caught my 5th keeper so I stopped and walked around the boat and attempted to pull in some other fish using a sardine. While I was doing this, I accidentally caught a sea lion who ended up breaking my line.

We did stop at one other spot on our way back in where our group started pulling in some nice barracuda. I got nothing more than a few bites. My final catch tally was 5 Sculpin, two of my largest are displayed in the picture below. Keep in mind my fish only appear small due to an intricate optical illusion resulting from the angle of the sun and the proportion of my biceps. 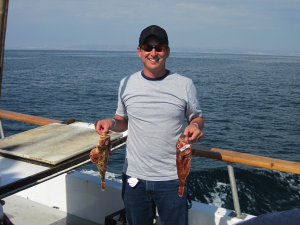 As we sailed back to San Diego, I had some time to reflect upon our voyage and I made the following observations:

1. You don’t really have to catch anything to have fun fishing. It was great being out on the ocean with friends and being hopeful to catch something.

2. One needs to be very vigilant in applying sunscreen when on a boat for 10 hours in direct sunlight. I applied some SPF 50 sunscreen twice during the voyage but, thanks to my sunglasses, I still look like I am looking through a pair of white binoculars at a nuclear detonation. I realize the sunscreen I used, pictured below, is for babies. I tend to use this as it can be used for my kids and the sunscreen is gentle on my sensitive skin) 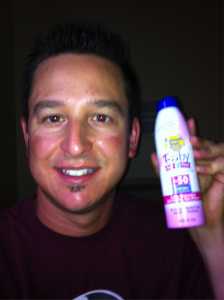 3. Next time I fish in Mexican waters I will bring my passport. A Mexican military boat cruised around us as a show of intimidation. We were instructed by the captain to congregate in one area if we were boarded as they are from time to time. I did not see “occasional foreign military onboarding” as a feature in the brochure.

The rest of the trip proved uneventful with the exception of the drive home. We were heading east on Interstate 8 just outside of Casa Grande when we drove right into the massive haboob of July 5 that hit Phoenix. Those of you who are not familiar with haboobies (I’m pretty sure that’s the plural of haboob) are no doubt wondering if it’s about time I have a censor review my posts. Not to worry, a haboob is a giant dust storm. Let me tell you, they are fun to look at in pictures (I have seen some giant haboobies in pictures on the internet…oh wait, that doesn’t sound right) but are NOT fun to drive through. The picture below shows our visibility as we went through: 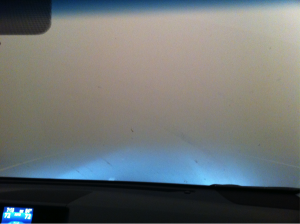 Thanks to God (and that’s not just an expression) we made it back home safely. Now, we get to look forward to gulpin’ some Sculpin.

No Replies to "The life of a fisherman"