Holy no-surprise! A blog about Batman!

I’m am very competitive. More competitive than you as a matter of fact. You want proof? I’m so competitive, when I am driving a group of people, I will use the power seats to move my seat forward just to know I am going faster than everyone else. It is this intense competitive drive that leads me to rate virtually everything in order to determine which is best (hmmmmm, Charmin toilet paper is affordable and I do like cartoon bears, but Quilted Northern feels so supple when it is “in use”. Verdict: Charmin!).

If there is anything I love as much as winning, it is Batman. Perhaps I feel such a connection to this superhero because of our shared dark background and an all-consuming desire to rid our city of crime vigilante-style. And by crime I obviously mean the dearth of unreturned shopping carts. Or, it could be that I like the costume.
As a result, I feel very connected to the Batman film franchise. I’ve watched all of them (including the sweet 1966 version: http://www.imdb.com/title/tt0060153/) and, as have most people, I’ve enjoyed the recent Christopher Nolan versions best. I think his films do the best at staying true to the dark tone of the original comic books that I have never read.

But rather than rate the overall movies and their plots, I want to instead rate the actor who played Batman in each. It seems everyone has an opinion as to which “Batman” was their favorite. I have my opinion as well but I will save it for the verdict section.

When the idea for this blog was originally conceived in my brain I had planned on using a list of several criteria to rate each Batman. Some of the categories I had envisioned were Convincingness As Bruce Wayne, Brooding, Comfort with Bat-Vocabulary, and Batmobile. As I began my in-depth analysis I began to realize something: Batman is a supremely logical, stoic figure. As such he conveys very little emotion (and approximately 98% of his body is covered with the bat-suit which also reduces the ability to emote using his bat-body). Therefore, ANY actor can play him as long as they can refrain from smiling and remember a few back-to-back syllables. That is why I wouldn’t be offended with Keanu Reeves as Batman. Or even a cutout of Keanu Reeves.

So what sets each actor apart in his personification of Batman? The answer is CLEARLY their lips. This is literally the only part of the actor visible while in character as Batman. The lips should be heroic and plump as an homage to the intimidating bat-muscles.
You may now be wondering to yourself, “what did each actor’s lips look like?” Well, wonder no more. For the sake of convenience I have added a graphic below showing the lips of each actor.* 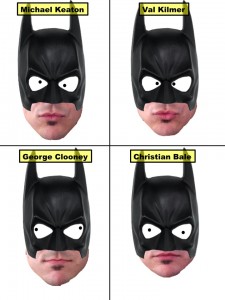 *To avoid a Bat-lawsuit, I have seamlessly imitated each actor’s lips in character as Batman as opposed to using an actual picture.

How important are the lips of Batman? Well, believe it or not, in the graphic above, I used comical googly eyes in place of regular eyes in the masks. You were too focused on the lips to even notice. That’s right, go back and look. Apology accepted.

Using lips as my criteria, I have come to an inarguable conclusion as to the best Batman actor EVER. And that actor is Val Kilmer. Just look at his lips (as portrayed by me). They are plump and regal. Michael Keaton’s come in a close second but he looks like he is trying to kiss something. This is something that would surely be exploited and mocked by a super-villain. Christian Bale is convincing but the cowl (or headpiece for you non superhero fanatics) comes down way to low over his face. And by far the worst is George Clooney. He doesn’t even have an upper lip! Although he does get points for faux nipples on the Bat-suit.

The lips are one of the main reasons I am concerned Ben Affleck won’t be able to pull of the next film. Granted he has more lips than George Clooney. But just barely. Ben’s lips say “I’m here but I’m weak.” They say this figuratively of course.

There are a few other actor’s who I’d love to have seen been chosen for the role based on their lip plumpness. Here are a few: 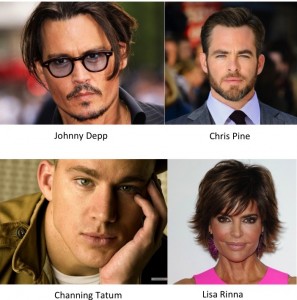 So, who do you think was the best Batman? And who would you love to see don the cape and cowl in the role? If you disagree with me, I’d love to hear your opinion and why you are wrong.

No Replies to "Holy no-surprise! A blog about Batman!"