Anyone who knows me will recognize I really only have two flaws: poor eyesight and an inability to recognize flaws in myself. While I have made no attempts to correct thelatter, I have addressed the former with years of using glasses and contact lenses. My vision was bad enough to prevent me from doing things like driving, playing sports, or navigating my bedroom barefoot without the aid of corrective lenses. For those of you with excellent vision, I can only describe mine as viewing the world through a petroleum jelly covered sheet of saran wrap underwater. Only not as sharp.

Glasses and contact lenses adequately addressed my vision, but there were still many times I wished I could see better naturally. For example, in school I would occasionally take off my glasses to give my eyes and head a break. The only problem is when I did that I couldn’t see more than 5 feet in front of me. I would often find myself staring at a blob only to realize it was someone sitting across the room from me. Thankfully I managed to avoid getting in trouble from these situations (either the blobs didn’t realize I was staring or they didn’t mind).

For years I have been waiting for my prescription to stabilize so I could get LASIK. I finally received the good news that I was a candidate last month. I immediately made an appointment with an eye doctor who came highly recommended from my optometrist and a friend. Before I knew it I had an appointment to undergo the procedure which occurred two weeks ago.

For those of you who are unfamiliar with LASIK, it is an acronym that stands for something. I am pretty sure the L stands for Laser and the other words are fancy schmancy doctor words for “eye surgery”. Either way, the procedure does an amazing job of correcting sight problems but carries some inherent risks. I gathered from skimming the waiver I signed that some of the potential risks from the procedure were loss of vision or even the entire eyeball. I had assumed these risks going in and was ready to accept the ramifications of losing an eyeball as mine were defective anyway.

I showed up for my appointment on surgery day excited, apprehensive, and with a full bladder. Once taking care of the bladder situation, I was instructed by the nurses to take the valium that had been prescribed to me. The picture below is a dramatic reenactment of me taking the medication and the subsequent effects. 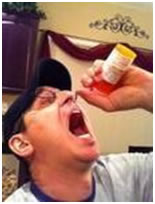 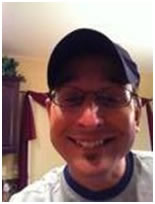 Next, I had to remove anything that would get in the way of the procedure like, judging by the hat and booties I was forced to wear, my dignity. See below for an actual photograph of me in the hat and booties on the day of my arrival. (This is the last known picture of me with defective eyes – as evidenced by my inability to locate the camera while the picture was being taken) While I looked like an imbecile (or perhaps a hospital cafeteria worker) I didn’t really care as I was on Valium.

After I donned the cap and booties, allowed the valium to take effect, and passed the blood pressure test, it was on to the procedure! The first step involves the creation of a flap of the cornea using a laser. This flap is then pulled up and a laser is used to reshape my cornea, correcting my vision. One peculiar memory of the procedure is the smell of my own burning cornea. This is not necessarily something I’d like to experience again. Once completed, the flap is then pushed down. The image below is an illustration of the procedure whereas the “F” is the flap and “L” is the laser (I assume “S” stands for “Seared Cornea”). 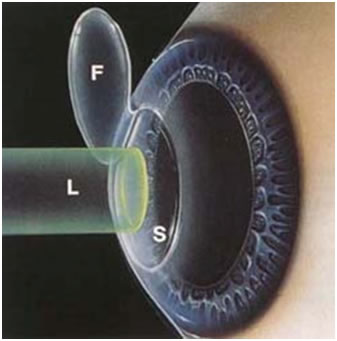 After the procedure, my eyes were flooded with numerous drops to promote healing and prevent infection. They also masked my manly tears of relief that the procedure was finished.

I was instructed to keep my eyes closed as much as possible for the rest of the day. This did not prove to be an issue as it felt as if I had accidentally dumped a bucket of beach sand in my eyes. In fact, it was an ordeal for me to try to open them, which was incredibly tempting as I wanted to check out my new vision. Believe it or not, the stylish eyewear you see me wearing in the picture below were provided AT NO EXTRA CHARGE to me after the surgery! What a gonga! 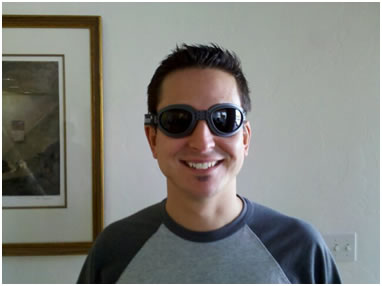 Five month update: After several months of getting used to my new vision, I am super happy about the surgery. My vision is still 20/15 and should stay that way for good. I’ve had to baby my eyes to keep them from getting hurt and I managed to get pink eye in both, but both eyes have made it through are in good shape. I think my only regret is not paying for the X-ray and night vision upgrades. Alas, I’ll make do…

No Replies to "Lasik"