It took quite a bit of courage to initially admit to you that I occasionally peruse celebrity gossip magazines (see previous posts). I can’t quite place my finger on their appeal but I think it has something to do with seeing famous people doing ordinary things (John Hamm buys toilet paper?! I do that too!!!). When stuck in a waiting room I’ll read any magazine, but generally the two I’ve been know to read (ie. Look at pictures and captions) are US Weekly and STAR. People is up there too, but it often has too much legitimate news. Unfortunately, I’ve recently noticed a disturbing trend in my magazines: all too often pictures and stories of pseudo famous people are taking the place of the hard-hitting journalism I have grown accustomed to with US Weekly and STAR.

This trend has really led me to ponder the absurdity that is “celebrity” in our culture. It has been discussed numerous other places, but we really do idolize people for the wrong reasons (except sports stars, they totally deserve millions of dollars and adulation for being able to jump high). I’m sure you can think of several examples of people who are famous despite a glaring lack of anything resembling legitimate talent (and I would love to hear your suggestions in the comments). Here are two that stick out to me, each representing an entire group of “celebrities”:

This group of people includes Steven Segal, Jean Claude Van Damme, Mr. Bean, Arnold Schwarzenegger. I know I am putting my very existence in peril by stating this, but a perfect representative of this group is Chuck Norris. Have you ever actually sat down to watch his “acting” on Walker Texas Ranger? Well, I have made the mistake of doing so and immediately regretted it (I am however thinking of keeping reruns to use as punishment for when my kids act up – does anyone know if this violates and child abuse laws?). Let’s just say that Chuck Norris will never have to use his martial arts experience to fend off overly aggressive Academy Award presenters.

Now, some of you may actually have lives and are therefore unaware of Mr. Norris. Although I highly doubt that considering you are spending time reading this (note to self: remove this last line before publishing. Research indicates insulting your audience actually hurts your chance of building their loyalty). He just happens to be the star of numerous action film classics such as Forced Vengeance, Slaughter in San Francisco, Missing in Action, and Total Gym infomercials. All of the above can be found on the WB between the hours of midnight and 4 am.

If his name is still not sounding familiar, I’ve provided a picture of him below (with a few key “Norrisian” features called out). 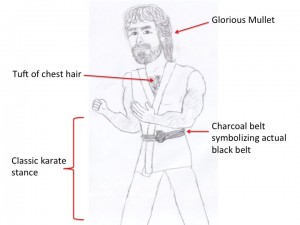 And when I say “picture”, I mean “my drawing of a picture.”  Normally I would paste in an actual picture. However, I have it on good authority that, to Chuck Norris, there are only two unforgiveable trespasses: the shedding of innocent blood and copyright infringement. To avoid receiving a roundhouse kick as punishment for the second infraction I recreated an image of his head. I’ve added the body (including an armless gi) to capture all of his hairy, muscular glory 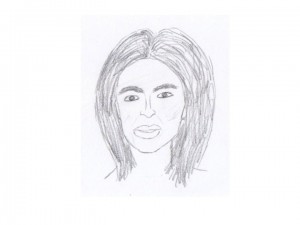 Don’t get me wrong, Kim Kardashian is an amazingly beautiful woman. I feel my picture really captures this natural beauty. At this point many of you may be asking “David, how are you able to so accurately capture the essence of your subjects in the pencil medium?” To that I say “Pencil medium?! I don’t speak Spanish. In English the adjectives go BEFORE the noun they are moderating. And I don’t use medium pencils, I prefer large.” Were you to ask how I draw so good, I’ve laid out my simple three step process below:

Back to the subject at hand: Paris and Kim are famous for nothing other than their last names. Somehow they’ve turned that fame into millions of dollars (which actually is a pretty amazing talent if you think about it).

It’s pretty sad that young kids idolize these men and women when there are many, many, many other people who deserve respect and admiration. Here are just a few people more deserving of the attention (and subsequent paparazzi stalking):

I’d love to hear some folks you feel should be featured on the cover of magazines at the store over pseudo celebrities.

No Replies to "Fame"