Nothing makes a father’s heart prouder than to hear what my son Ashton came home from school asking last week. His teacher told him about the book fair being held this past weekend and he wanted to know if we could go. At first I thought, “what a ridiculous idea.” A fair for books? They aren’t even sentient beings? How in the world could they enjoy fair staples like overpriced, under-safe rides and deep-fried candy bars? Ashton then proceeded to explain the concept of a book fair (a festival dedicated to books). That boy definitely takes after his dad. I used to be what you might refer to as a “nerd” in school, partially because I loved to read (and partially because I was fashion-sense-oblivious). In fact, I read virtually every one of the first 100 hardcover Hardy Boys mystery novels. As a direct result, one thing I did not read often was notes from secret admirers.

As it sounded like fun to an avid reader like myself and because we figured we should encourage positive things like a love of reading in our children (even if it means booking weekends years from now for chess tournament travel) we headed out Sunday afternoon.

The festival turned out to be huge! Nearly the entire University of Arizona mall was covered in vendor tents. There were some bigger names like Bookman’s and the Arizona Daily Star but there were also a lot of tents for little known authors who were trying to sell their Arizona based mystery books. I didn’t realize how many people actually get their books published. At the festival you could buy an array of books from “Murder in Benson” to “The Great Wilcox Grand Theft Auto” to “Public Indecency in Safford”. Of course all of those titles were made up by me, but I think the safe money is one on of them actually being a title at next year’s book fair.

In addition to book sellers, authors, and publishers, there were plenty of political themed tents and petitions like “keep the F-35 out of Tucson” and “no more high rises” (I couldn’t figure out why a city like Tucson with approximately zero high rises needed less). We walked right next to a group surrounding a man with a large “Recall Brewer” sign and petitions to sign (I assume with the intent of recalling Governor Brewer). It took every bit of restraint I had to not walk up to him and say “you’ve misspelled reelect sir”. Karina was even encouraging it. However, I figured a college campus filled with librarians was the last place I should be revealing my conservative principles. So in a seamless effort to blend in, I started chanting “raise my taxes NOW” and “Electric vehicles are totally worth the premium and hassle of a limited driving range” as I walked by.

I wish I had thought to take pictures of the festival but I did not have enough foresight. Karina did take one and I’ve shamelessly stolen it for use in my blog. 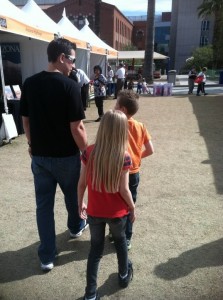 Despite the lack of photographs it’s not hard to imagine the ambience though. I liken it to being in a library without the compulsion to whisper or feelings of embarrassment for standing in front of the picture book section for too long (is that just me?).

After walking through about half of the festival we decided to call it a day and head home. Alyson was getting grumpy due to all of the walking. Considering how far we went, I don’t blame her. To her little legs we walked an equivalent adult-leg distance of the Boston marathon.

Plus I was getting stressed trying to keep my older daughter Lynsey fracture-free. Lynsey (I love her with every bit of my heart, including both ventricles) has the God given grace of a gazelle…afflicted with Parkinson’s Disease…with a wounded leg… being incessantly tazed. To make matters even worse, she was wearing heelies which will no doubt be the direct cause of at least three Emergency Room visits in the near future. For those of you who are not aware of heelies, they are shoes with a skate wheel on the heel as it is obvious that the 4 wheels on a regular pair of skates are far too stable. Despite Lynsey’s lack of coordination and possession of death shoes, for some reason we thought it would be a good idea to let her buy a sun umbrella with her own money. My little uncoordinated ball of energy running around a huge crowd of people thrusting about a 3 foot diameter impaling device…great thinking us.

Next year I’m hoping to go on the first day of the festival. Over the course of the festival many authors came to speak and it would be neat to actually meet an author of one of my favorite books (like Picturebooks Presents: Trains are Big!). Until then I’ll gas up the van and get my encouraging chess tournament signs ready to go (“Pawn”ish Him Ashton!).

No Replies to "Book Fair!"