There are few things that scream “80’s” like roller skating does. Notable exceptions being neon leg warmers and excitable weatherman Chuck George in early spring. Karina and I both spent a good portion of our formative years in the 80’s roller skating so, like most normal parents, we decided our kids youth should be spent in the exact same manner as ours. So, after watching a few episodes of the Smurfs, we headed out to Skate Country in an effort to duplicate the high point of our youth for our children.

During the heyday of the Tucson roller skating scene there were 3 Skate Country venues in town. Unfortunately the economy and demand for recreational roller skating dropped precipitously recently and only 1 Skate Country remains in town. Thankfully everyone who has ever stepped skate in more than one Skate Country knows they are all almost identical inside (with the location of the DJ booth being the notable exception). So I felt right at home in the venue on 22nd Street despite spending most of my skating years in the location on Stone (R.I.P.).

Admission during the 2 hour free skate we chose was $3 and there was an additional $4 per person rental fee if you do not bring your own skates. So, for $7 each we got unlimited wheeled fun (for 2 hours). When you think about it, $7 is actually a fantastic bargain when it comes to ways to humiliate yourself. I remember gliding around the rink in my slither shoes back in the day thinking all the ladies must be staring at me. Unfortunately, hindsight gives me confidence that they actually were…only not to ogle my grace on wheels or how my sweet red short-shorts hugged my buttocks. Rather they were probably getting a good chuckle as I cavorted around the rink thinking I was God’s gift to wheeled footwear.

So, this afternoon I laced up my pre-moistened skates with a little trepidation. It had been years since I last tried to skate and I not only didn’t want to embarrass myself, but I did not want to land violently on one of the children I am legally bound to protect. 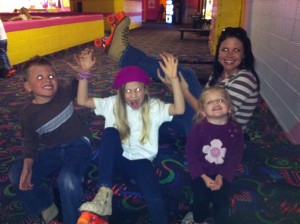 My family just prior to skating. As you can see, their corneas had already sensed danger and gone to seek shelter.

As the afternoon wore on, I realized I needn’t be too worried. Karina and I spent practically the full two hours trying to keep our two daughters upright. Each of us would hold either Lynsey’s or Alyson’s hand as we accompanied them around the rink. Ashton had gone once before and felt far more confident on wheels to the point that he was fine falling down repeatedly on his own. I do sorta joke about that. Ashton actually did a great job considering it was his second time out. He even participated in the race. Poor guy fell down several times and the whole crowd was cheering for him to finally cross the finish line. Which he did crawling (partly as a joke). Serious father moment: I was super proud of him for racing in the first place but sticking it out to finish even though he was nowhere close to winning.

Karina did watch all of the kids at one point to allow me a solo lap of the rink. It had been a while since I’d been out there and it came back fairly naturally. However, my comeback was hampered with the fact that I choose skates about as well as I choose shopping carts at Wal-Mart. As demonstrated in the picture below, my right skate was just fine but the left skate had a mind of it’s own. 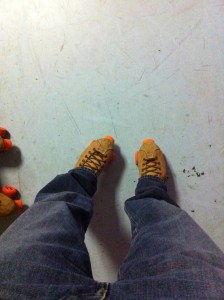 A mind that apparently kept thinking “must leave the rink!”

My particular footwear was the skating equivalent of this: 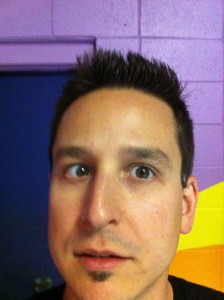 One of the more harrowing experiences came when Alyson informed me she had to go to the bathroom. Helping an independent toddler use the restroom is difficult enough. Doing it when you are on 16 wheels between the two of you ups the level of difficulty to nearly “brain surgery”.

All in all the kids had a blast and made great strides in their comfort on the skates by the time we left. Lynsey even decided she wants her next birthday party (in one year and 4 days) to be held at Skate Country.

1. Favorite moment with Lynsey. The picture below was taken literally right after she said “I think I’m getting the hang of it [skating]”. You can’t make this up. 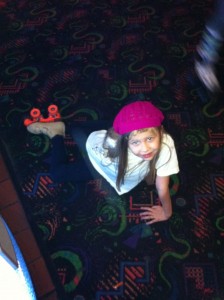 It is my parental duty to ensure I have taken a picture of my daughter prior to helping her up.
2.  My favorite moment with Ashton came when he was leaving the rink. He fell down on his way out. When he got up, he said “that’s how I stop. I slam my knees on the ground”. I suppose that’s one way to do it. I tried to explain to him the concept of the brakes on his shoes but he felt bruising his patella was easier.
3. One thing I remember most about Skate Country interiors are the sweet murals. And by “sweet” I mean “dated”. The Skate Country on 22nd was no exception. I have provided some pictures of their mural below. Notable absent in my pictures are the random pastel-colored geometric shapes that are painted throughout the brick building.

This picture appears to depict a knight of some sort. Perhaps a knight defending the Kingdom of Rad. 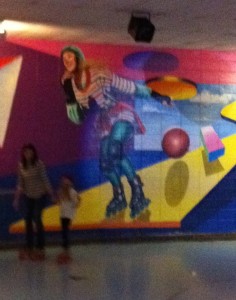 This however was my favorite part of the mural. 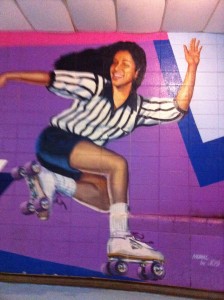 At first I wasn’t impressed with this image of a clearly talented referee. But then I looked closer and began to see the subtle nuances of the painting and the story the artist was clearly trying to tell. For example, it took me a while to figure out what gender the skater is. The body clearly appears to be female but the strong jawline hints at a man. Then it hit me. The artist chose to portray this ambiguity so that anyone viewing the portrait can relate to the image. Ladies will see a female, men will see a male, and skating referees who don’t have time to look where they are skating will see one of their own.

The second aspect of this portrait that hints at the artist’s genius is the right ankle. As you can see, the ankle crosses over part of the wall. From various angles this can lead to a distorted view of the ankle. I think this distortion is exactly what the muralist was going for. It must reflect the compound ankle fractures that are most likely a daily occurrence at the rink.

No Replies to "Chicks Dig the Wheels"